"You're going to be very sorry you crossed me."
— Anthony to Professor Hershel Layton just as their duel begins, Professor Layton and the Diabolical Box

Anthony "Anton" Herzen is the main antagonist of Professor Layton and the Diabolical Box. He is a (rumored) vampire who rules over the town of Folsense as its duke, and the true owner of the Elysian Box.

As a young man, Anton had long blonde hair and blue-based turquoise eyes. He was rather pale from spending years inside the castle, he wore a long blue coat with red on the inside, strongly reminiscent of the vampire character he pretended to be.

Anton has a very complex character. Before the disaster, he was modest and polite, having been raised as an aristocrat. He disliked being high up in society, implying that he was humble. Being with Sophia made him very happy; he was devastated when she left him, and not knowing why frustrated him further. From then on, Anton became withdrawn, harboring a hatred for betrayal above everything else. Though he never truly forgave Sophia for leaving, he was happier with her reasoning, and behaved more like a gentleman.

Fifty years before Diabolical Box, Anton fell in love with a young lady named Sophia. They first met at one of Duke Herzen's parties, and soon afterwards became engaged.

Not long afterwards, however, a horrible disease struck the town. Anton wrote in his diary that he could have coped with the disaster so long as Sophia was there by his side. But, unknown to Anton at the time, Sophia was pregnant, and ran away from Folsense to protect their child from the fatal disease.

Soon after her departure, Duke Herzen died from the disease, handing his title to Anton. Anton, being the current duke, remained in the castle for years, living alone (except for his butler, Nigel) severely depressed and angered, thinking that Sophia had left him for another man.

When news came that thieves were stealing his family gold from the mines, Anton decided to play the part of a monster. Anyone who came too close to the mines or his castle

was caught and locked in the cellars, then let loose after they had been thoroughly frightened so they could spread rumors around Folsense of the vampire living in Herzen Castle. Almost all of the nobles and old families who knew the Herzens beforehand had evacuated or died, so there was no one left to disprove the claim.

Before Sophia had left, he had the Elysian Box made for them, appearing to be a simple jewelery box. It had a secret compartment in the base that only he and Sophia could open, the lock inspired by an old saying. When Sophia left, Anton decided to put a message for her in the compartment and asked a passing traveler to take it to her. But unfortunately, because of the value of the box, it was stolen multiple times, and Anton gave up hope of it ever reaching her.

When Professor Layton and Luke decided to head to Herzen Castle to solve the mystery of Folsense, Nigel was at the castle to greet them. He took them to Anton, who offered them food and drink. After a short talk about the Elysian Box, of which Anton claimed not to know much, he allowed the two to stay the night.

As Layton and Luke slept, he tied them up (poorly) and locked them away in one of the storage rooms in the castle cellars. When they woke up, he "proved" the vampire rumors, and left them to spend their "last hours" together.

When Anton found them and Katia running for the exit in the great room, he didn't seem too surprised, until he noticed how Katia resembled someone. He mistook her for Sophia, believing that Layton was the reason that she left him. Anton threatened Layton, ordering him to pick any sword off the display to fight back, but that only one of them was real. He hinted to Layton about the real sword, that "A true warrior always keeps his blade in hand." Layton, understanding the clue, drew a

sword from a suit of armor's hand and faced Anton in a duel.

The two had a fierce battle across the grand room. In the climax of their fight, Anton quickly became breathless and nearly collapsed, despite looking so young. Katia begged her grandfather to stop, shocking Anton, who believed it was impossible for him to be a grandparent. Layton told him the truth of Folsense; how it was an illusion of fifty years ago created by hallucinogenic gas from the mine, while Katia explained that Sophia had left him because she was pregnant with her mother; Anton's daughter, who died soon after Katia was born. Sophia had wanted to protect their child from the illness spreading around the town.

Katia then told him that Sophia had passed away a year ago, causing Anton to fly into a rage of disbelief, slicing through a pot and a pedestal. He attempted to swipe at Layton,

accidentally cutting a chain holding up the massive chandelier. It crashed into the floor. Because of the castle's delicate foundations, it began to collapse, and the hole which lead to the mines was blocked by the debris. With the rubble of Herzen Castle filling the pit of the mine, the illusion of Folsense lifted, and Anton's true form was revealed: an old man. He realized the mistakes he made. Layton gave the Elysian Box back to him,

and Anton said that he put a hidden message for Sophia in a secret compartment, the way to unlock it being from the saying: "The sun rises when you and I meet, and when the wind blows, you will know my heart." He offered it as a puzzle to Luke for him to solve.

Luke solved the puzzle and opened the box. Anton, expecting the letter he had sent, was shocked to find a reply from Sophia, written days before her death. In the letter, she expressed how he had never left her thoughts, why she had left, and that she was going to pass very soon. She wished for Anton to spend his remaining years with Katia, and that she will be waiting for him on "the other side."

Greatly moved, Anton looked toward the sky, and asked for Sophia's forgiveness. He said that he has to keep her waiting a little while longer so he can get to know a certain somebody. He looked away with tears in his eyes.

He is last seen in the game on the hillside with Katia, watching Layton and Luke leave via the Molentary Express.

During the credits, it is shown that he reunited with his brother, and he was planning with Katia to repopulate Folsense with its descendants from Dropstone. 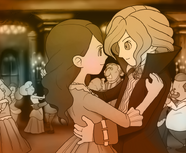 "There's no lack of swords here. Take whichever one of them you like. Know this though: only one of them is real. ... A true warrior keeps his blade in hand." 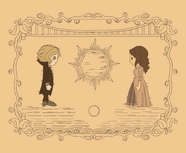 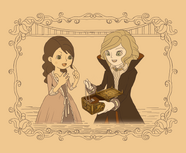 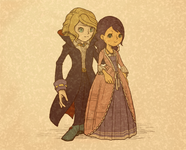 "Well, chalk it up to my bad taste then."

Though rumored to be a vampire, Anton is actually the current duke of Folsense. Fifty years ago, Anton was separated from his love, Sophia, a blow from which he never truly recovered. He is also the elder brother of Beluga.

Anton, the current duke of Folsense, is rumoured to be a vampire. Fifty years ago, Anton was separated from his love, Sophia, a blow from which he never truly recovered. He is also the elder brother of Beluga.