Archie O'Logie was a world-famous archaeology professor who was killed during an expedition in the South American jungle. 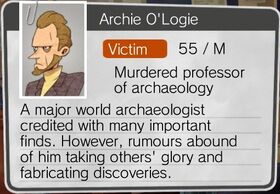 O'Logie became famous from his discoveries although rumors soon popped out that he took the credit from other archaeologists. Nevertheless, he planned an expedition to the South American jungle with other archaeologists such as his archaeology student Doug Scowers. At one village, he gained the assistance of a local named Chico Careta, who had some extent of English-speaking skills.

At one dig, they had uncovered an ancient stone idol, which was noted to be slightly cracked. To store their finds, O'Logie had a hotel proprietor named Micah Sasucasa let the archaeology team use a storage hut.

Careta wanted O'Logie to put the stone idol back at the site as he and other villagers believed in demons and his fiancée Mariana Etista enticed him to kill the archaeologist. Careta and Etista offered O'Logie and Doug liquor and wounded up having the latter fall asleep outside the hut. As Etista went back to the hotel, Careta hid in the hut using tall signs hung by a coat hook and killed O'Logie with an axe used to chopping wood.

Careta found the stone idol after rummaging through three crates of artifacts and called the hotel using the intercom and started claiming he saw a demon. Although he tried to impersonate O'Logie, Etista, who picked up the call, instantly recognized his voice and had Sasucasa go with her to investigate the hut.

As they walked up to the hut, Careta quickly set up the corpse with thin fishing lines and went back to his hiding spot. When Sasucasa forced the door open, Careta pulled the fishing lines to make the corpse appearing to be moving by itself. He accidentally knocked a bottle of liquor but eventually stopped having the body move. Later on, Careta gave Etista the stone idol.

For O'Logie's murder, the police detained Doug as he was the archaeologist who was found near the crime scene. Half a year later, the investigation of O'Logie's murder, led by Inspector Alfendi Layton and Lucy Baker, was reopened as requested by Doug's younger brother Dustin Scowers. Knowing the technology the Mystery Room used to solve cases, Etista knew Careta would be found out so she sent him to England, under the presumption he was merely sightseeing. Like she predicted, Careta was found out as the killer, along with Etista as the mastermind behind the case, so Doug was no longer suspected as the culprit of his teacher's murder.

After Careta was detained for questioning, Etista fled the village and attempted to sell the stone idol found by the archaeologists.

Retrieved from "https://layton.fandom.com/wiki/Archie_O%27Logie?oldid=67363"
Community content is available under CC-BY-SA unless otherwise noted.