Birdly is a character appearing in Professor Layton vs. Phoenix Wright: Ace Attorney. He is a witness in the second witch trial.

He is first seen outside Sir Belduke's house when Luke runs into him and Ms Primstone. He later joins them and Emeer as a witness in the second Witch Trial. During the trial he is temporarily recruited as Emeer's personal bard. 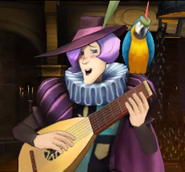 Birdly as he appears during Professor Layton vs. Phoenix Wright: Ace Attorney

Birdly's trial avatar
Add a photo to this gallery

Retrieved from "https://layton.fandom.com/wiki/Birdly?oldid=70124"
Community content is available under CC-BY-SA unless otherwise noted.