Bosco Felps is a rich import-exporter who was the lover of Sandy Aldwich. He temporarily set aside his work to enjoy a vacation with her at a five-star hotel but Aldwich was later murdered. He tried to conceal his name from Inspector Alfendi Layton and Lucy Baker during the investigation. His age is 37. 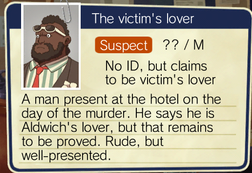 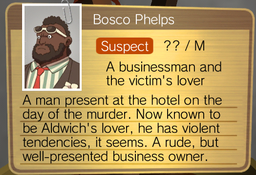 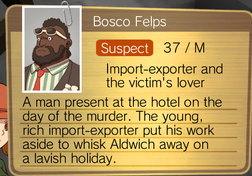 When Felps and Aldwich checked in a hotel room, Aldwich gave him a key card for later access. When he walked by the hallway to get to his room, he passed by Zach Carrière, a bellboy, and smelled the aftershave he had. However, by the time he entered their room by himself, he failed to spot her dead body out on the terrace as the curtains obscured the terrace and he also smelled a strong scent of aftershave. As he couldn't find her anywhere, he left the room, placing a sign on the door handle to have the room cleaned later.

The body was later found by a hotel cleaner named Vera Wipovsky. After Wipovsky called the police about the murder, Felps decided to withhold his identity in order to have his import-exporter image not be connected to the murder in any way. Felps was later interviewed by Alfendi Layton about the murder although he only told them his actions on the day of the murder and him being the victim's lover.

During the investigation, he entered the Mystery Room office after Lucy Baker concluded he killed Aldwich as a crime of passion. He argued with Lucy about him being the murderer but calmed down and explained that he had his own business to worry about. Alfendi figured he was a business owner and he wanted to avoid any bad publicity by hiding his identity. Felps reluctantly accepted he was right about his motivation but refused to tell them anything else until his lawyer showed up. Before he left, he agreed to stay close for questioning and noticed the bellboy's aftershave.

Later, Felps became cooperative about his identity and occupation as he was informed of the killer framing him for murder by having the sandwich turn into a dying message that pointed to him as "Phelps" and using his tie to kill her. The culprit was later found to be Zach Carrière, who killed her after she had dumped him because of money issues.

Retrieved from "https://layton.fandom.com/wiki/Bosco_Felps?oldid=71710"
Community content is available under CC-BY-SA unless otherwise noted.