Buster Nicks was an old serial burglar who was a witness to the murder of Jack Potsby. He was one of the three suspects of the case. 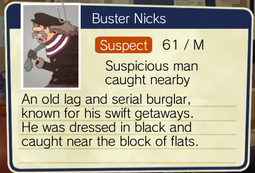 Nicks was a veteran serial burglar who was known around the block to be dressed all in black and escaping the premises swiftly before the police came. Before he began one of his burglaries on a ground-floor flat of an apartment building, he heard the sound of glass breaking from a first-floor flat, which greatly shocked him. At first, he thought it was just another burglar but when he saw that nobody came out of the balcony, he quickly fled the scene but was later caught by Chase M. Downes.

Nicks gave his statement describing what he was doing around the time of the murder but it created inconsistencies with the statement from Goldie Potsby-Mahn. Because of his statement, the existence of a "muscular man dressed entirely in black" was questioned by Inspector Alfendi Layton during the investigation.

For much of the investigation, Potsby-Mahn had insisted it was Nicks who killed her husband as the window was shattered and it was the only method of entry that he could try since neither her nor Potsby personally knew Nicks. However, Nicks was found innocent as a veteran burglar wouldn't break into a flat with all the lights on and the clues at the scene suggested the murderer was in the flat beforehand. The killer turned out to be Potsby-Mahn, who killed her husband for his life insurance, as the sound Nicks heard was Potsby-Mahn destroying the window outside on the balcony to make the scene appear to be burglary.

Retrieved from "https://layton.fandom.com/wiki/Buster_Nicks?oldid=69700"
Community content is available under CC-BY-SA unless otherwise noted.