Chase M. Downes was the concierge of an apartment where a murder took place. Because he helped apprehend a suspect, he was one of the three suspects of the case. 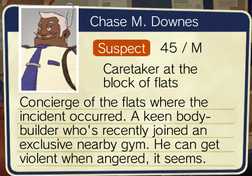 Downes was the concierge of an apartment building and also became a bodybuilder by joining an exclusive gym. While he was on duty, he heard the sound of glass breaking and immediately went to Jack Potsby's flat. He tried to open the door but remembered that all the doors lock automatically so if there was a burglar, he must have escaped through the balcony. His wife Goldie Potsby-Mahn explained to him that a muscular man dressed entirely in black broke a window to enter the apartment and killed her husband.

Downes quickly conducted a search for a suspicious man and caught a known burglar named Buster Nicks. Nicks stated he had planned to break into a ground-floor flat but soon heard the sound of glass breaking. He had thought it was another burglar but when no one came out, he abandoned his plan and fled to the rear entrance although he was quickly caught by Downes.

It later turned out that the investigation conducted by Inspector Alfendi Layton and Lucy Baker revealed the intrusion Potsby-Mahn told Downes about was all a ploy to have Potsby appear to be murdered by an intruder. The sound of the window breaking Downes heard was really Potsby-Mahn smashing the window from the balcony's side after she killed Potsby. Because of Downes hearing the noise and immediately running to the flat, she didn't have enough time to thoroughly destroy all traces of the murder weapon, which led to her undoing.

Retrieved from "https://layton.fandom.com/wiki/Chase_M._Downes?oldid=87378"
Community content is available under CC-BY-SA unless otherwise noted.