Claudia is a cat owned by Lady Violet, then by Lady Dahlia in Professor Layton and the Curious Village.

Claudia appears in the bonus RPG that is included with Professor Layton and the Last Specter. He is found in Clement's Boutique during the day and behind the Vinegar Grill during the night. If the player disturbs his walking pattern, he will hiss.

Claudia has a cameo appearance in Professor Layton and the Eternal Diva. He appears sleeping on a couch in Nina's parent's house, whom Emmy was interviewing about Nina's disappearance.

Claudia is first seen being held by Lady Dahlia when she and Professor Layton meet. As Layton and Dahlia are about to shake hands, a very loud noise shakes the walls of Reinhold Manor, and scares Claudia away. Layton and Luke give chase and find him near the clock tower. Luke attempts to befriend him, only to receive a scratch on the face, and Claudia runs away again. Later, an old woman named Agnes tells them to lure Claudia back with fish bones, and it proves successful. Claudia is seen again later wandering around the manor gardens with Simon's glasses in his mouth shortly after Simon's "death".

Claudia appears as a character in "The Missing Figurine", the third book featured in the Picture Book mini-game.

Although Claudia, himself, doesn't give the player any puzzles clicking on him once during the game makes Layton ask Luke a question. This gives you the puzzle "Weighing Cats.﻿" 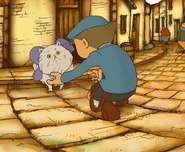 Claudia's appearance in the end credits.

The completed portrait of Lady Violet and Claudia.

Claudia in "The Missing Figurine".

Lady Dahlia with Claudia on her lap.

Lady Dahlia holding Claudia.
Add a photo to this gallery

This fluffy little cat may have a delicate name, but the shocking truth is that she is actually a he. He usually stays close to Dahlia, but he has been known to slip away and tear up the fish stand to relieve a little stress.
Retrieved from "https://layton.fandom.com/wiki/Claudia_Reinhold?oldid=92083"
Community content is available under CC-BY-SA unless otherwise noted.