Member of the Knights of the Inquisition

Constantine is a dog owned by Sir Zacharias Barnham, who appears in Professor Layton vs. Phoenix Wright: Ace Attorney.

Though Constantine does not give out the puzzle Wagon Draggin', it is started by talking to him, it is then solved by both Luke Triton and Maya Fey.

It is said in Episode 8 of Professor Layton vs Ace Attorney in the downloadable content that Constantine was adopted by Sir Zacharias Barnham around 1 year ago. Constantine was seen as a witch as he would take sheep from farms and food. Barnham was able to chase him down one day but the food Constantine collected was in a pile, Barnham describing it as "untouched". It was food for Constantine's parent, who Barnham recognised the dog who sparked the "Bouncing Barnham" incident, where that dog jumped out at Barnham and suprised his horse during the Storyteller's parade and Barnham was dragged around town. However, the horse injured the dog during the incident and it limped back into the woods. The dog did not heal from it's injuries and passed away without Constatine realising, hence collecting food for it.

Barnham, blaming himself for the death of Constantine's parent, adopted him. 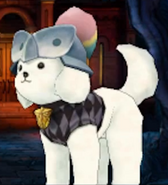 Contantine as he appears in during Professor Layton vs. Phoenix Wright: Ace Attorney