"Layton has been my archnemesis ever since that fateful day!"
— Don Paolo to Luke Triton, Professor Layton and the Unwound Future

Paul, who went under the alias Don Paolo, is the primary antagonist of the first trilogy of the Professor Layton series. He is Professor Layton's self-proclaimed arch-nemesis.

He is short but he can quickly disguise himself. His hair is mostly pointed upwards, but it was revealed in the Unwound Future that his hair wasn't previously styled in that manner. Don Paolo wears a purple coat with a red collar, and a white shirt with a turquoise tie. He has orange trousers and flat brown shoes.

The criminal mastermind who first comes to light in Curious Village, Don Paolo is renowned as a scientist of the highest order and views himself as Layton's rival. When he's not plotting evil plans, he enjoys listening to music. Despite this, he can be very helpful, though he claims he only does it for Flora. He is very prone to anger but rather intelligent and cunning.

There is little information on Don Paolo's early life. Some of it is revealed in Unwound Future. Professor Layton's sweetheart, Claire, was also loved by Don Paolo, then known as Paul. However, after seeing Claire choose Layton over him, he got into such a rage his hairstyle changed forever. He cried and ran away, running into the river. His hatred towards Layton worsened when Claire died. Paul swore that one day, he would have his revenge on him, but has been unsuccessful so far.

The "World of Professor Layton" artbook described more of his history: "Don Paolo is a brilliant but unfortunately evil scientist. His dark ambitions got him exiled from the society of scholars. Don Paolo is a master of disguise, which he demonstrates when he infiltrates St. Mystere by way of impersonation. Don Paolo considers Professor Layton to be his greatest nemesis, and the reason for this rivalry can be traced back to a specific event in their shared history." The "specific event" mentioned relates back to his feelings for Claire.

In Curious Village, his flying machine crash-landed in St. Mystere, and he sets to work. Soon after he arrives at the village, he discovers what has happened to Simon, and, shocked until he realizes who Simon truly is, takes him away to examine the ingenious engineering that made him. He uses Simon's 'death' as an excuse to disguise himself as famed Inspector Chelmey, and after a lot of 'investigation', rudeness towards Layton, and a Ferris Wheel incident, he accuses Professor Layton of Simon's murder and attempts to arrest him. He told Giuseppe to give briefly him a blue vase which imprinted his fingerprints, then he smashed the vase on the wall. Professor Layton realizes that the inspector is really Don Paolo through a series of mistakes Don made. First, a newspaper reveals Chelmey's love of sweets, Don got furious at Matthew for bringing tea cakes earlier, this led to the revelation that Don doesn't know the name of Chelmey's wife, Amelie. Next, it was impossible for the inspector to enter the village as the lifted drawbridge had its crank stolen well before Simon's 'death' was discovered. Finally, Don mentioned a key that Layton and Luke had despite the two not revealing it to anyone.

With his cover blown, he flees from Reinhold Manor. He doesn't return until the game's ending sequence, where he attempts to kill Layton, Luke and Flora by demolishing the tower from the safety of his flying contraption. His machine, however, is accidentally damaged by Layton's makeshift glider, and he swears revenge for reasons unknown as his machine crash-lands far away from St. Mystere. He's seen again during the ending credits walking away enraged.

In Diabolical Box, Don Paolo is the person who steals the Elysian Box from Dr. Schrader. While Layton, Luke, and Flora are in the town of Dropstone, Don Paolo seizes the opportunity and captures Flora leaving her in a barn. He then disguises himself as her and joins Layton and Luke on their journey. Much later in the game in Folsense's Hotel, Professor Layton spots something odd in what 'Flora' says, and reveals Don Paolo to be the true thief of the Elysian Box. Inspector Chelmey attempts to apprehend the evil scientist but he manages to escape. He is seen again during the ending credits running away from Inspector Chelmey past Folsense's restaurant.

Don Paolo appears briefly in the opening scenes of Eternal Diva. Don Paolo appears when Professor Layton accuses an elderly lady of silencing the bell of Clock Tower. It turns out that the elderly woman is, in fact, Don Paolo in disguise. Don Paolo then jumps off Tower Bridge and flees with the use of an umbrella that converts into a small propeller as Layton and the authorities give chase. Inspector Chelmey and Barton also appear in this scene.

In Unwound Future, he appears as an ally and not as a villain. When the main characters are captured by Dimitri in the Towering Pagoda, it is discovered that Professor Layton was really Don Paolo. The fake Professor Layton removes his disguise, and the real one walks through the door and sets them free. Don also made disguises for Dr. Schrader and Dean Delmona in Future London.

In a further twist, it is discovered that Don had struck a deal with Layton, posing as a decoy in case something went wrong. That way the real Layton would be able to help.

Luke and Flora are surprised to see him helping out for a change but it is revealed that he has the same goal as Professor Layton and that his hatred towards him is because he loved Claire, and was heartbroken when he witnessed her tell Layton that she liked him. His hatred for Layton worsened when he learned that Claire died in the explosion of the time machine during its first test run at the Institute of Polydimensional Physics. He blames Layton for not protecting her better on that day, thus he swore to seek vengeance upon him ever since. He too questioned her death.

After exiting the Towering Pagoda, which turns out not to be "Future Layton's" true headquarters, Don Paolo explains the true reason for his hatred toward Layton and leaves the group in awe.

He then disappears to work on a "little project", and reappears after leaving a puzzle at the Research Facility. Towards the final showdown with Clive, Don had built his own version of the Laytonmobile, with the ability to fly. He can be seen watching the Laytonmobile through binoculars as it flies away from the wreckage of the Mobile Fortress at the end of the game, shouting "Aha! Well done, Layton!" from a rooftop. What happens to him afterward (in the games)​ is never revealed.

In the anime, Don Paolo re-appears ten years later during the tenth episode, briefly involved in the mystery concerning Layton and Luke that takes place before Layton's later disappearance. In the episode he is disguised as officer Donald Zachbarn, an employee of the British Museum. He had locked up Luke in a room in the museum's basement, because he was interested in the mystery of the Hidden Relics where Luke was working on. Layton saw through his disguise, however, and told him the police is waiting for him outside. Layton gave him the key to the door in the back alley so he was able to leave the place scot-free.

﻿Even Don Paolo makes up a couple of puzzles in Unwound Future. The first puzzle of his design were given while disguised as Schrader. This puzzle was "Medicine Time". Later on in the story, Professor Layton and Luke venture off into the Research Facility. To get inside they solve the puzzle "Follow the Code". Don Paolo reveals that this was his puzzle and then gives them "Beams and Ladders" as they go down into the facility. Near the end of the game Don Paolo gives Professor Layton the puzzle "Scrutinized Screws" in order to fix the Laytonmobile. 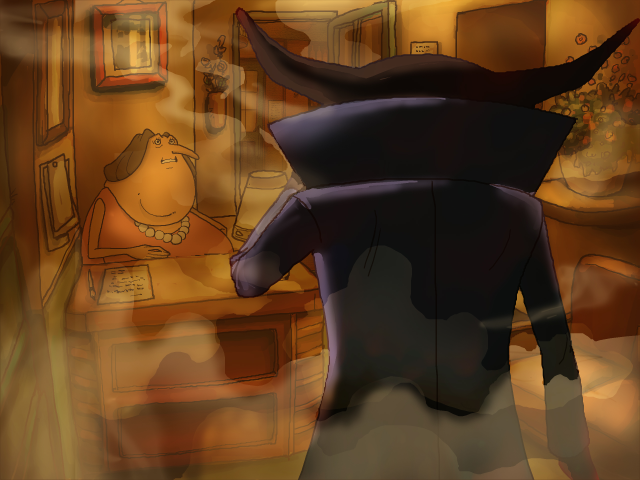 Don Paolo's Inn room in St. Mystere.
Add a photo to this gallery 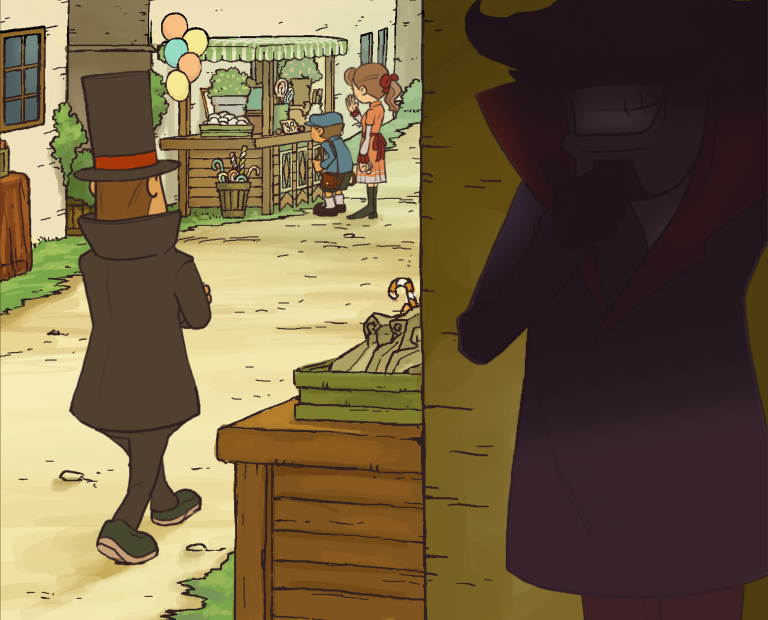 Don Paolo in Unwound Future.
Add a photo to this gallery

Don Paolo in Kat's Mystery-Solving Files.
Add a photo to this gallery

The criminal mastermind who poses as Inspector Chelmey, Don Paolo is renowned as a scientist of the highest order and views himself as Layton's rival. When he's not plotting evil, Don Paolo also enjoys playing music.

A brilliant scientist who believes himself to be Layton's archnemesis, Don Paolo disguises himself as Flora to gain access to information and to wreak general havoc. Unbeknownst to Layton, Don Paolo also studied under Dr. Schrader.

A brilliant scientist who believes himself to be Layton's arch-nemesis, Don Paolo disguises himself as Flora to gain access to information and to wreak general havoc. Unbeknownst to Layton, Don Paolo also studied under Dr Schrader.

Don't be fooled. While this may look like Flora, this is actually Don Paolo in another of his masterful disguises. He swapped places with the real Flora to spy on Luke and Layton. He's such a master of mimicry that he's even got her walk down pat.

Don't be fooled. While this may look like Flora, it is actually Don Paolo in another of his masterful disguises. He swapped places with the real Flora to spy on Luke and Layton. He's such a master of mimicry that he's even got her walk spot on.

A brilliant scientist who believes himself to be Layton's archnemesis, Don Paolo's appearance changed forever when he found out that the girl he loved, Claire, was seeing Hershel Layton. His skill as an inventor is matched only by his mastery of disguise.

A brilliant scientist who believes himself to be Layton's arch-nemesis, Don Paolo's appearance changed forever when he found out that the girl he loved, Claire, was seeing Hershel Layton. His skill as an inventor is matched only by his mastery of disguise.

This time around, Dr. Schrader was actually Don Paolo in disguise. The likeness was perfect, but the mask slipped a little when Dr. Schrader wasn't surprised to see young Luke in the future.

An impersonation of Dr Schrader by Don Paolo, his former student. The likeness was perfect, but the Don was unable to resist taking a sly dig at his great rival and Dr Schrader's favourite student, Hershel Layton.

Another uncanny disguise by Don Paolo. He gave himself white hair to indicate that Delmona has aged 10 years, but this subtle touch proved to be his undoing.

A fake future Dean Delmona staying at the hotel, he is really Don Paolo in disguise. He gave himself white hair to indicate that Delmona had aged 10 years, but this subtle touch was what gave him away.

Paolo uses a few disguises in an attempt to obtain the Queen's Blood. He was living in the Humble Homes, but kept avoiding the police.

Retrieved from "https://layton.fandom.com/wiki/Don_Paolo?oldid=91358"
Community content is available under CC-BY-SA unless otherwise noted.