Duke Herzen was the duke of Folsense. He was the father of Anton Herzen and Fredrich Herzen.

He was the one who found the Gold Mine of Folsense and brought the town many riches and wealth. He hosted many parties in Folsense and was very influential. One of the various parties he hosted was the one Anton and Sophia met for the first time. He first disapproved of their relationship, but came to be friends with Sophia eventually. The Herzen Museum that Beluga built in Folsense has a lot of exhibits based on the work of this man. The picture to the right is found inside the museum's upper level. A large statue can also be seen at the end of the hall in the first room of the museum. He is holding a pickaxe symbolizing his work beginning the mining for gold in the Folsense mine. Also, the late Duke Herzen could have been the one who made the Elysian Box, as Anton said the box was a Herzen family heirloom. It is unknown, however, if he also knew about the hallucinogenic gas that spewed from the mine and gold harvested from it. When Sophia left Folsense, his relationship with an extremely depressed Anton declined drastically, and he soon died from the disease plaguing the town. 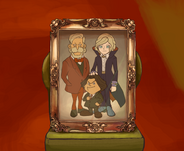 Duke Herzen is Anton and Beluga's father, as well as the man who discovered Folsense's gold deposit and made the town rich. Unyielding and stubborn, he never got along well with his sons, but he was only trying to do what he thought was best.

Duke Herzen is Anton and Beluga's father, as well as the man who discovered Folsense's gold deposit and made the town rich. Unyielding and stubborn, he never got along well with his sons, but was only trying to what he thought was best.

Retrieved from "https://layton.fandom.com/wiki/Duke_Herzen?oldid=88997"
Community content is available under CC-BY-SA unless otherwise noted.