"...Behold! Who am I, you ask? Who AM I? Why... I'm the man that's gonna single-handedly save this trial! I'm the fifth witness! Har har!"
— Emeer during Espella Cantabella's first trial, Professor Layton vs. Phoenix Wright: Ace Attorney.

Emeer Punchenbaug, known as "Some Guy" at first, is a character appearing in Professor Layton vs. Phoenix Wright: Ace Attorney. He is a witness during several trials in the game.

He first appears during the first witch trial, when he unexpectedly joins as a fifth witness. This leads the other witnesses to become unsure, as they all believed there were only four witnesses. He didn't show up at first because he was too drunk to hear the Inquisitors call forth all witnesses.

He appears yet again as a witness in the next witch trial, this time under his full name. Strangely, he somehow seemed to have become very rich, his clothes filled with valuable gemstones. He also planned on starting his own company, the Punchenbaug's Retail Organisation (PRO). It later turns out he had taken the arm of Professor Layton, who had been turned into gold. He sold it for a high price to a local pawnbroker, which made him very rich. However, he is exposed during the trial and needs to give everything back.

Later in the trial it also turns out he had taken the bottle of tomato juice in Sir Belduke's office, after he and Jean Greyerl forced open the door. He then fell asleep on the couch due to the sleep medicine in the juice. 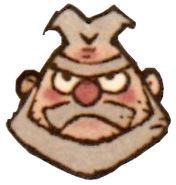 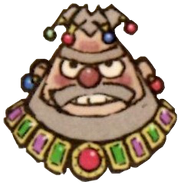 Retrieved from "https://layton.fandom.com/wiki/Emeer_Punchenbaug?oldid=76735"
Community content is available under CC-BY-SA unless otherwise noted.