She has blonde hair and blue eyes. She wears a black and white dress, brown boots, and has a red cloak. Her hair is in two braids. 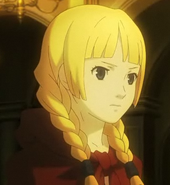 "Your accusation is wrong, for I am not a witch"

Espella's avatar during trials.
Add a photo to this gallery

Retrieved from "https://layton.fandom.com/wiki/Espella_Cantabella?oldid=84198"
Community content is available under CC-BY-SA unless otherwise noted.