Future London is the main setting for Professor Layton and the Unwound Future, although, the London from the present is also in the game for a while. Future London is a vast and huge city equipped with restaurants, suburbs, towering skyscrapers, and has a long river going through it.

The vast city of Future London has many winding streets and paths inside. Much of the city is under construction in an industrial revolution of sorts. There are large gears and pipes along almost every street corner and building. There are very tall buildings in Future London seen but unable to venture off into. There is also the Clock Shop and towering Pagoda which are extremely high up buildings. Many of the streets seem cramped and hastily put together.

Midland Road is located in Baldwin, even in the future. Baldwin is on the west side of London. The streets on this side of the city seem to be much more industrial than other sections of the London from the Future. The Clock Shop in the Future seems to be a very, very tall tower that seems to never end as it can be seen for miles. Anita, a local resident, owns a fifty year old cafe. She is a nice women who lives on Midland Road and she caters to most of the travelers in the area. At the southern most area of Future London is an old bus stop. It is clear to many who walk by that it is no longer in service.

Southern Street and the ArcadeEdit

Along the southern side of Future London is Southern Street, obviously. It is here one of the two entrances to the arcade is. The Arcade is a long path with a beautiful glass roof with domes. The arcade has a restaurant owned by Paillard and other local shops that cannot be accessed. Along Southern Street, Hotel Duke can be found. This large hotel caters to the majority of travelers apparently. The hotel is used as a safehouse for Layton and co. At the end of the road Flatstone Street is found.

Flatstone Street is a long and straight street located in the middle area of Future London. At the southern area of this street houses a circular plaza with one of the many underground railway paths. Using this railway grants access to Green Hospital on Auckland Lane and Chinatown later on. To the west of this plaza a park can be found. This path can be used to go into Midland Road a lot faster than Southern Street. This park also houses a large observatory with a great view. However, the view isn't as great, with the research facility blocking most of it.

At the northern most area of Flatstone Street one can find the Gilded Seven Casino. The casino itself is a glamorous building with lights and has a slot machine-esque look to it. This casino is used by the Family to make hundreds and hundreds of pounds each day. To the right on the way here one can find themselves on the way into Chinatown.

Auckland Lane is located in southern Future London. In the game, it is only accessible via a subway tunnel. It is the home of a large hospital called Green Hospital. This hospital is where Layton and Luke confront the Dr. Andrew Schrader of the future, who is later revealed to be Don Paolo in disguise. Natalia, a nurse working at the hospital, is also here. The Laytonmobile, later revealed to actually be a replica, is found, destroyed and rotten, outside of the hospital in an alley by a dumpster. Dr. Schrader, in the future, owns the automobile and tells them where it is. Green Hospital isn't in the game for much else.

The Path to Chinatown and the Research FacilityEdit

The road into Chinatown is long and has many sections of it. The first part of this street goes through an alley and behind the casino. Before the alley is a statue of a local hero who resembles Layton in many ways. Past the alleyway is a steep hill that goes along the River Thames. This area is apparently a rabbit named Subject 3's turf. The area houses a large restaurant by the name of the Thames Arms. The Thames Arms is a major location in the game. A lighthouse can be seen on the other side of the River Thames. Under this lighthouse is Clive's secret weapon, the Mobile Fortress. On this side of the river as well, is a giant research facility used by Dimitri Allen and the other scientists he has kidnapped. The facility is and was used for dangerous and horrendous experiments. This facility is where Layton and Luke go to look for Dimitri after he escaped the towering pagoda. The path that leads into Chinatown then leads into a dark forest-like area. Here, later on in the game, Pavel is found. After a long hill upward, the black market of Future London is found. It is in this area that the main gate and entrance to Chinatown is also found.

Chinatown and the Towering PagodaEdit

In Layton's present day London, Chinatown didn't exist. Layton makes quips on how London has changed but this one takes the cake. Chinatown, located on the northeast side of Future London, is a large village with many shops and homes. The shops and important buildings found within Chinatown are the Toy Shop, Pet Shop, Puzzle Shack, Bookstore, and a noodle shop.

Chinatown also is the home to many citizens of Future London. A subway station can also be found in the northern part of Scarlet Street. Along the eastern part of Azure Avenue, Puzzlette's Puzzle Palace can be seen. It is here Beasly's job is replaced with Puzzlette, granddaughter of Granny Riddleton.

On the northern-most area of Chinatown, The Family's headquarters, the Towering Pagoda, is found. In front of the pagoda are many warehouses used for a variety of reasons whether it be the stores, The Family, or just storage. The pagoda itself is a towering structure designed from early Chinese building designs. The large tower houses some of the highest ranking family goons as well as Future Layton, himself. It is here that Layton confronts the so-called Future Layton who reveals himself to be Dimitri Allen in disguise. He later escapes to wherever and then Layton and co. barely escape and search the city for Dimitri.

It turns out that Future London was actually built inside a vast cavern located under the real London. It was built by Clive in order to carry out his revenge on Bill Hawks and Dimitri Allen. He used the wealth from his foster mother, Constance Dove, to build the vast city. The Clock Shop on Midland Road was actually an elevator that carried people to and from the two Londons; the Research Facility across the Thames was where Dimitri Allen worked on the Time Machine he wanted to use to save Claire; and in the depths of the River Thames was where the Mobile Fortress was hidden. When Clive began his revenge--destroying most of London--Inspector Chelmey, Barton, and the Clock Shop's employees can be seen getting all of the residents evacuated.

Future London was obliterated when the Mobile Fortress exploded as it fell in the large cavern. 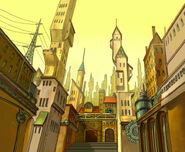 Future London in Unwound Future
Add a photo to this gallery
Retrieved from "https://layton.fandom.com/wiki/Future_London?oldid=82435"
Community content is available under CC-BY-SA unless otherwise noted.