"It's nice to see you again, Professor Layton!"

"It's nice to see you again, Inspector Grosky."

"The professor will never lose to the likes of you!" 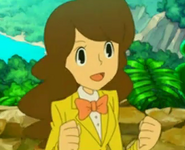 Emmy in the Black Raven outfit

Emmy cooking for Layton and Rosa

Emmy on her scooter.
Add a photo to this gallery

Driving to the Crown Petone Theater

"You'd better get used to this sort of thing, if you want to become the professor's second assistant."

"It seems that it's not only this girl who is talking about Eternal Life."

Taking photos of the Crown Petone.

"Have the police discovered anything about your daughter's disappearance?"

"Doctor Schrader, does this come from Ambrosia?"

"Yes, and with the missing audience members from the Crown Petone aboard them. Most of them anyway."

"Nina! Your mummy and daddy sent me."

Listening to the professor's explanation.

Concept height comparison chart.
Add a photo to this gallery

Illustration from 'The World of Professor Layton'.
Add a photo to this gallery
Retrieved from "https://layton.fandom.com/wiki/Gallery:Emmy_Altava?oldid=91066"
Community content is available under CC-BY-SA unless otherwise noted.