The Gilded 7 Casino (known as the Lucky Casino 7 in the Japanese version) is a casino that only appears in Professor Layton and the Unwound Future.

It is where Bostro, Dimitri's second, frequently hangs around and shouts orders to his minions.

After the Puzzle Battle, Future Luke explains, that after the explosion, Dr. Alain Stahngun went into hiding, and turned to Layton for help. Layton, being an intellectual genius, agreed to help and started drift farther and farther into London's crime depths and more distant from Luke. Soon, Layton became the head of the Family and started to rule London with an iron fist. Layton then started getting obsessed with time travel and started to build a time machine with the scientists he had kidnapped. Future Luke wanted to enlist Layton's help in stopping Future Layton from building that time machine. Professor Layton agrees to help.

Immediately, after the trio walk out of the basement where they were conversing, Bostro recognizes one of the group and he tells his lackeys to not let them escape.

Groups of Family members emerge with guns. Professor Layton and Luke are seen behind some slot machines, and Layton tells Luke that he has a plan. Noticing spare parts of slot machines, he whispers his plan to Future Luke nearby.

After the puzzle (putting together a slot machine gun), Future Luke pours the coins into the slot machine gun, and Layton starts firing. Bostro, realizing that the Family can't win this fight, tells his subordinates to retreat.

As Layton and co. adventure into the casino they spot a fountain. Tapping on the fountain in front gives the puzzle "Mr. 8:20". Around the time of the Mobile Fortress being revealed, you can solve the puzzle "Quirky Clockwork" from the doorman, and two puzzles "A Roll of the Die" and "The Marked Cup" from Mark inside the casino. 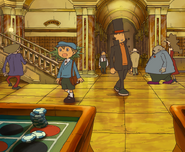 Layton and Luke meeting Future Luke.
Add a photo to this gallery
Retrieved from "https://layton.fandom.com/wiki/Gilded_7_Casino?oldid=64895"
Community content is available under CC-BY-SA unless otherwise noted.