Gressenheller University is the university in London, England that Professor Layton works at. At the age of 27, Layton became a professor of archaeology there, teaching the students all there needs to be known about the subject. His classes are shown to be quite popular. According to the logo, the college seems to be mainly focused on archaeology, so for Professor Layton, choosing to be a professor of that subject seems to boost his popularity amongst the public. The dean of Gressenheller University is Dean Delmona.

Professor Layton and the Last Specter[]

In Last Specter, the game started with Emmy riding here on her motorcycle to start her new job as Layton's assistant. Meanwhile, Rosa gets Layton's post from outside his office, which included Clark's letter, and gives it to Layton while she makes tea. After reading Clark's letter, Layton abruptly leaves for Misthallery, not noticing Emmy by her motorcycle on the way out. Emmy chases Layton, and is forced to dangerously overtake the Laytonmobile in order to get his attention.

Later in the game, Emmy goes back to the university for some papers at Layton's request. When she walks in, she remembers that she forgot to ask where Layton's office was, so asks Dean Delmona, who points her in the right direction. Rosa lends her a hand in finding the documents in Layton's cluttered office, and Emmy then leaves for Scotland Yard.

Professor Layton and the Miracle Mask[]

In Miracle Mask, Professor Layton, Luke, and Emmy discuss their trip to Monte d'Or at the beginning of the game in the professor's office here. The location is not seen again throughout the storyline of the game, but however, is notified as Professor Layton's stop whenever he leaves Stansbury in his final journal entry in the past timeline.

In a secret scene in the Hidden Door, Luke and Emmy are having a conversation, which other characters appeared in as well.

In Professor Layton and the Diabolical Box, Layton goes here in the very beginning. He is with Luke Triton at this time. Luke is tasked with finding the Laytonmobile's keys. Layton wants to visit Dr. Schrader's flat in London so he wants to get the keys as soon as he possibly can. Layton and Luke look for the keys in his study. After the keys are found and Luke and Layton exit the hallway of the university, they take a ride in the Laytonmobile to the home of Dr. Schrader.

Professor Layton and the Unwound Future[]

In Unwound Future, Layton and Luke go back to the present about half-way through the game. It is here at Gressenheller University, Layton finds the notebook he has kept for years in his office. Layton wants to visit the university before they go ahead to Scotland Yard. So they head off to Layton's study by using the bus. Outside of the building, Smith, the new guard for the university, can be found. Layton and Luke go into the study and find the notebook. In his study, Flora then ambushes them. She is upset and enraged when she finds out that Luke and Layton went off on an adventure without her. Layton tells her that they will take her along with them, but then he and Luke then sneak out and leave the university, off to Scotland Yard. Later on in the story, Flora then meets up with Layton on their way to the clock shop.

After the ending credits roll, Layton can be seen in his office at Gressenheller University, without his top hat on. He just received a letter from Luke, explaining his new stamp he made, how he's been doing, and a new mystery apparently tailor made for Layton. He then smiles as he looks out of the window in his office.

Layton, Luke, Horace, Avogadro, 'Pavel' and the player meet up in Gressenheller University's research lab to talk about the Queen's Blood. When the truth is revealed, Don Paolo (whom was disguised as Pavel) runs off. The player and Layton evacuate as well. 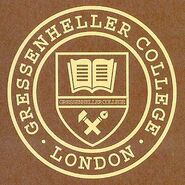 The symbol of Gressenheller University

Luke's notebook with the Gressenheller logo imprinted on it.

Luke walking towards the door of the Professor's home.