Inspector Alfendi Layton is the title protagonist of the spin-off game, Layton Brothers: Mystery Room. He is Professor Layton's son,[1] and works as an inspector for New Scotland Yard's Mystery Room department.

Alfendi has olive eyes, fair skin, a pointed nose, stubble on his chin and burgundy/wine hair.

Four years prior to the events of Mystery Room, Alfendi wore a dark gray suit and had his hair shorter.

During the game, Alfendi wears a striped blue and red sweater with a long white coat. He wears red and white sneakers on his feet. He seems to keep newspapers in his pockets all the time. He keeps a long dark blue coat (as shown in the case selection screen), but apparently only wears it if he's not working (shown during denouement and credits of the game). When his "Placid" state is fronting, his hair is neatly tied back into a low ponytail behind his neck, its color resembling a wine purple, while it dangles in a long, deep crimson fringe when his "Potty" state fronts, with one his eyes barely visible.

He is considerably tall, as compared to other characters, he was often much taller than them. He's even a whole head taller than his partner, Lucy Baker.

Following the events at Forbodium Castle, Alfendi developed a Dissociative Identity Disorder (also abbreviated as DID) involving two dissociative states, referred to by Lucy Baker as "Placid Prof" and "Potty Prof". His original personality state, "Potty", fronts irregularly, while "Placid" fronts the majority of the time, so much so that Lucy initially believed Placid to be his original personality. Sometimes switching between the two makes him feel unwell (as seen in Cases 2, 3 and 4).

When Potty switches in, Alfendi displays a savage temper and demonstrates a fascination with criminals—the more gruesome and sadistic they are, the "better". He was shown to be much less polite as evidenced from his comments during Potty's appearances, and very straightforward, not afraid to critique others. Potty is also more sarcastic compared to Placid, his alter. Florence Sich advised Lucy that she should be safe if a criminal was present, but to run if she's alone with him. When Placid presents, however, Alfendi is very laid back and calm, and in the words of Hilda Pertinax, "meek, even considerate". Placid was much kinder and treats people more politely compared to Potty. Although he can still become quite single minded at times and displays similar investigative skill and deductive logic. Despite being very contrast to each other, as stated above, both personalities share one trait; highly deductive and intelligent.

Alfendi is a renowned inspector for New Scotland Yard. Together with his partner Lucy Baker, he investigates crimes for the "Mystery Room".[2].

Lucy was practicing her dramatic pointing pose when Alfendi suddenly walked in, telling her "it's an unlikely deduction". He told Lucy that she doesn't need to feel the pressure of formally addressing him, but to his dismay she called him "Prof", which he finds inappropriate due to Hershel, his father being an actual professor. He haven't decided if he'll take in Lucy as his permanent assistant, so he gave her a case- an opportunity to prove her worth to him while at the same time introducing her to his reconstruction device which eliminates all need to exit the office to investigate crime scenes. After Lucy succeeded in solving the case, he asked her to be his assistant on (I quote Alfendi..) "a more permanent basis".

This is the first time where Lucy discovered about Alfendi's personality disorder.

While confronting the culprit, Lucy and Alfendi found themselves in trouble after forensics debunked their theory about the clock hands being the weapon as they found no traces of blood in it. Things were about to go downhill, but Potty saved the day. He showed up in time and was able to reveal the true murder weapon, succeeding in proving the culprit guilty. Lucy compared his personality disorder to of Jekyll and Hyde. Florence Sich, the forensic that requested the case also warned Lucy about the dangers of being alone with him, telling her that she'll "rip her drip and run like the wind" if she finds herself alone with Potty Prof.

Justin Lawson assigned Alfendi and Lucy to solve a high profile case which involved a famous actress murdered during a play.

Much like before, when Placid was unable to get the culprit to confess, Potty steps in, although using threats and rather, sharp remarks, was able to get him to confess. Lucy later told Justin of Potty's violent tendencies, in which Justin later replied to ask her to report to him if he started mumbling unusual names and unfamiliar places, on the quiet.

Dustin Scowers asked Alfendi and Lucy to solve a murder, which involved his brother as he was arrested on the suspicions of murdering Dr. O'Logie.

Alfendi was shown to be quite skeptical and disbelieving of supernatural things, often disagreeing with the culprit about demons and anything of the sort. Like previous cases, Potty ends up having to step in in order to get the culprit to admit to their crimes. Dustin later informed Alfendi that Mariana Etista, one of the suspects that the police was supposed to bring in for questioning on the suspicions of masterminding the murder, turned out to be a fake identity, or as Dustin referred to her, "a total enigma". This information later would play an important part in the next cases.

Sniffer Hague, a detective working under Justin Lawson assigned Alfendi and Lucy to solve a radio show host's death after he died during airing.

The culprit often purposely misspelled his surname to piss him off, to which, as predicted, angered Potty Prof. This is one of the rare cases where Alfendi had to solve a multiple murder case (case 009 does not count because one of the victims have died years prior, his case was only being reopened).

The commissioner himself, Barton, stepped in for this one and personally assigned Alfendi and Lucy to solve quite a shocking murder where a feared mafia family were found murdered in a warehouse.

This is the only case where Alfendi and Lucy did not immediately figure out the identity of the culprit, rather only solving the method of murder, as they only found one suspect/witness (who is innocent). The culprit herself was later identified, but not in the same case.

This case is a special one, as Alfendi had to actually step out from his office and investigate the actual scene, unlike previous cases where Alfendi and Lucy were able to solve cases via the reconstruction device. This case is also the only one, out of all nine cases, where Alfendi didn't solve a murder-related case, rather to go after an escaped culprit. This is where Alfendi was able to identify the culprit behind case 006 and the true identity of Mariana Etista from case 004.

Alfendi received an invitation from Diane Makepeace, the daughter of Keelan Makepeace who he was suspected to killing years prior.

He was instructed to go alone under Diane's threat that she'll detonate a bomb in a nearby hospital or Lucy's home if he does not follow what she says. He was held hostage and forced to watch Lucy solve a case to save her own life, to which he later praised Lucy as a job well done. He did not appear in this case, rather, Lucy was the main investigator here, to solve a case to which Alfendi was assigned to years prior.

This is the final case of Layton Brothers: Mystery Room. This case is quite extraordinary, as it puts Alfendi as both the suspect and investigator.

After Diane subsequently released Lucy from captivity, she heard a gunshot from a room above, only to find Alfendi tied up and blindfolded with a dead Diane laying in her own pool of blood. Hilda caught up and questioned Alfendi's involvement in this. As soon as she managed to convince Lucy that Alfendi is guilty, she attempted to arrest him when Potty suddenly showed up. Potty Prof assumed control for majority of the case. Justin arrived later, and to Hilda's distaste he gave Alfendi a chance to defend himself. This case, is where the truth of about Alfendi's real personality was revealed by Hilda to Lucy. Turns out, all this time, Placid was Alfendi's second personality- Potty is his true self. She explained that Placid was someone neither herself or Justin have met before four years ago, and that Placid showed up after the incident and not before.

In this particular case, instead of Alfendi pinpointing the culprit and solving the murder, this case, Lucy saved the day. Alfendi’s more of helping role her during the investigation, while during this case Lucy played a vital part in exonerating him and reveal the true culprit and the mastermind of Alfendi's accident years prior. Lucy came into action as Alfendi was cornered and nearly doomed, similar to Potty's tendency of stepping in when all hope seemed lost.

Alfendi eventually discovered of how his disorder came through- when he was in a coma, he was brainwashed into thinking he murdered Keelan, thus creating an alternate identity where Alfendi knew he's guilty- which the truth is- he's not. Lucy later took him outside the office and encouraged him to ditch his paperwork and go outside for a while as seen in the denouement of the game.

In the last Case Coda of the game, titled Letter to a Friend, Katrielle writes a letter to Lucy, mentioning Alfendi and his ongoing work together with Lucy.

In the last moments of the final episode, Alfendi and Lucy are seen entering Katrielle's detective agency and joining forces. 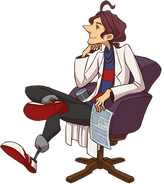 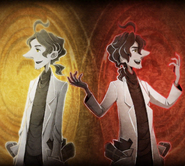 Retrieved from "https://layton.fandom.com/wiki/Inspector_Alfendi_Layton?oldid=85533"
Community content is available under CC-BY-SA unless otherwise noted.