Jean Greyerl is a character from Professor Layton vs. Phoenix Wright: Ace Attorney. She was the butler of the late Sir Newton Belduke.

When she was younger, she lived happily together with her parents. However, one day, they were unable to afford the rent of their house. So, in order to save them, she cast the spell Goldor so that they could sell the gold piece. However, something went wrong as her goat Margaret walked in front of her, turning her into gold.

Due to the shock of what she had done, she tried to drown herself in a river. However, Sir Newton Belduke managed to rescue her. After hearing her story, Sir Belduke told her that she could stay with her, but that she had to disguise herself as a boy from now on. He then went to see Jean's parents and bought the house for them. After that, they agreed to let Jean stay with him as his butler.

On one day, everything changed as a lightning bolt struck and a bell tower appeared. Sir Belduke's personality changed drastically. A while later, Jean saw him write something about "exposing the witch", which she assumed was her. As such, she made a plan to steal the letter. After painting the wall of her room green, she used the spell Godoor to create a portal so she could grab the letter from behind. However, after reading the letter was addressed to the Storyteller, she panicked and strangled him.

She appears as a witness during the second witch trial. Upon fully reading Newton Belduke's letter, Jean found out that "the Witch" was not her. In addition, Phoenix Wright established that Belduke drank poison to commit suicide in the end, which makes Jean not guilty of murder after all. But since she is still guilty of being a witch, the Inquisitor orders her to be executed anyway. However, Espella offers for herself to be executed in her staid.

Jean was later found by Phoenix Wright, Luke and Espella while imprisoned in the Deathknell Dungeon. She tells them the Inquisitor decided not to execute her after all and that she is awaiting a new sentence.

At the end of the game, she can be seen with the other villagers, waving Professor Layton and co. goodbye.

Greyerl as she appears during Professor Layton vs. Phoenix Wright: Ace Attorney 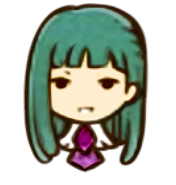 Greyerl's female trial avatar
Add a photo to this gallery

Greyerl does not have a profile.

Retrieved from "https://layton.fandom.com/wiki/Jean_Greyerl?oldid=76680"
Community content is available under CC-BY-SA unless otherwise noted.