Kira is a character in Professor Layton vs. Phoenix Wright: Ace Attorney. She is a witness in the first Witch Trial of the game.

Kira is a slender young woman with light skin and brown eyes. She wears her brown hair in a braid under a white kerchief. She also wears a pink dress, a white apron, and black boots. She usually carries a basket of daisies.

Kira acts sweet until she is antagonized, when she is fierce and determined. When driven to extreme stress she acts as if she is manic. She is often seen trying to convince others to buy some of her flowers.

At some point, Kira came to live in Labyrinthia, where she was one of the women assigned the role of a witch. She owned a Talea Magica with the magic gems for the spells Dimere and Ignaize. She was forced to hide her identity as a witch, lest she be tried and executed in the Witches' Court. She used Dimere to make her Talea Magica invisible as she carried it with her at all times.

Kira worked as a flower seller, and her boss often scolded her for not selling enough. She usually wore glasses.

Kira read the Storyteller's newest story on the day Professor Hershel Layton and Luke Triton arrived in Labyrinthia. In the story, two young companions were burned by a witch's spell.

After night fell, Kira was walking on the forest path north of the marketplace when she saw Espella Cantabella as she was accosted by Muggs and Robbs. Kira cast Dimere, making herself disappear. She snuck up to the trio and cast Ignaize, burning the two criminals. At this moment Kira's glasses fell off and landed in the bucket of milk Espella was carrying.

Four people nearby besides Espella saw the column of flame and came near. Kira, still invisible, tried to find her glasses on the ground but could not. She left her Talea Magica in the bushes, then ran past Emeer Punchenbaug and chanted "Amere" to make herself reappear.

Espella was arrested as a witch since she was thought to have burned Robbs and Muggs. Kira stood as a witness at Espella's trial alongside Mary, Knightle, Wordsmith, and eventually Emeer Punchenbaug.

Phoenix Wright, standing as Espella's defender, managed to prove that it was impossible for Espella to have cast the spell that killed the two criminals. He theorized that Kira was actually the witch. His theory was proven when Kira's glasses were recovered from the milk bucket.

Kira was then moved into the cage suspended above the courtroom's pit of fire. She revealed that she believed Espella was in fact the Great Witch Bezella, and she had framed her in the hope that Espella's execution woud bring about the end of all witch trials, allowing Kira to live in peace.

The cage dropped into the pit of fire, supposedly killing Kira. She was however secretly transported to the Eldwitch Woods, where her memories were suppressed and she became a shade in service of the Great Witch.

Kira performed a task for the Great Witch by setting an explosion in the marketplace, but she was stopped by Phoenix Wright and Luke Triton before she could escape. She dropped the silver bell she was carrying, but recovered it and donned her Invisibility Cloak to make her escape.

The Great Witch commanded Kira to climb the Bell Tower on the night of the final witch trial and recite the incantation Granwyrm toward the Storyteller. Kira made it to the second floor of the tower, but was attacked by High Inquisitor Darklaw as she waited for the Storyteller's parade to end. Darklaw administered sleep medicine to Kira, rendering her unconscious, but not before Kira scratched Darklaw's neck and tore off Darklaw's pendant. Darklaw then stowed Kira away on the hidden top floor of the tower.

Kira remained there until partway through the final witch trial, when Phoenix Wright and Maya Fey solved the puzzle of the bell tower and gained access to the top floor. Kira was then made to stand as a witness in the trial. She eventually revealed to the court that Darklaw had been the Great Witch until recently, and led them to understand the identity and purpose of the shades. She also recalled the events of the evening from her own perspective. These revelations helped the court toward the eventual conclusion that the Great Witch Bezella had never existed and Labyrinthia was a fabricated town.

Kira is seen living happily in Labyrinthia after the events of the game. 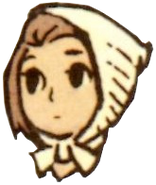