Lady Viola Reinhold
Lady Violet Reinhold is a major character in Professor Layton and the Curious Village. She is the late wife of the late Baron Augustus Reinhold and is Flora's biological mother.

Lady Violet wore a pink dress, and wore her hair in a loose ponytail, tied with a ribbon.

She was a very kindhearted woman, as shown by how much she loved Flora.

Violet died from influenza prior to the events of the game, while Flora was still very young. The baron had her buried in the manor garden, so she could still be close to him, even in death. When she passed, the baron asked Bruno to make a robot replica of her as a gift for Flora. However, the baron was very saddened by how similar it was to Violet, so Bruno changed her personality, creating Lady Dahlia. The baron was happy with Dahlia, but Flora was terrified of her, and spent most of her time playing by Violet's grave.

When the baron learnt of his terminal illness, he wrote in his journal about 'how he would be with his beloved Violet once again'.

Lady Violet does not have a profile. 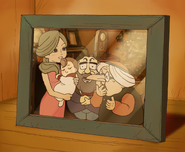 Retrieved from "https://layton.fandom.com/wiki/Lady_Violet_Reinhold?oldid=83020"
Community content is available under CC-BY-SA unless otherwise noted.