레이튼 미스터리저니: 일곱 대부호의 음모
Layton's Mystery Journey: Katrielle and the Millionaires' Conspiracy is the seventh mainline game in the Professor Layton series. It follows Katrielle Layton, the daughter of Professor Layton. With the help of her friend Ernest Greeves and a talking dog named Sherl, Kat solves various smaller mysteries in London in the hope of finding her missing father.

The puzzles in the game are designed by Kuniaki Iwanami, due to the passing of Akira Tago.

Before the game's release, it was being promoted through an ongoing campaign, which had people solve puzzles in the real world all around the globe. During this campaign, it was possible to obtain items that could be transferred to the actual game once it was released.

This is the page that shows what you can unlock with points from the museum.

Prologue: Lady and a Tramp Edit

Private detective Katrielle Layton, daughter of the famous Professor Hershel Layton, awakens from a nightmare about her missing father on the day of her detective agency's opening. The same day, Katrielle and her assistant Ernest Greeves meet a talking dog that, for reasons unknown, cannot be understood by anyone else but them. The dog explains that he has amnesia, and that he wishes for them to solve the mystery of who he really is, and Katrielle makes up the name "Sherl O.C Kholmes" for him.

Case 1: The Hand That Feeds Edit

One of the hands of Big Ben has gone missing and Inspector Hastings calls upon Katrielle's aid to solve the case.

Case 2: Murder on the Thames Edit

London's "Riverside Festival", a special event where two lovers confess their love to each other on opposite sides of the River Thames, is underway. However, right before the last day of the event, two such lovers meet an unnatural death right after confessing in a manner connected to the mysterious legend that started the event in the first place.

Ernest tells Katrielle and Sherl that he has won some tickets for a movie premiere in the nearby Saveloy Theatre. Katrielle and Ernest decide to attend; but just as the movie is about to reach its climatic kiss scene, it turns out the scene has been stolen!

Madame Gretchin Doublée asks for the help of Katrielle to find her pet Rex, who has seemingly disappeared.

Katrielle is invited by Liza Wight to her residence to investigate on ghosts that appear to be haunting the mansion.

The Layman's Reserve bank, owned by Grant Sloanes, has been robbed of one hundred million worth of paper notes. They enlist the help of Katrielle to find out the culprit.

Katrielle is asked by Taboras Lloyd, the chief editor of the London Times, to investigate the mysterious disappearance of Ratman, a local superhero.

Case 8: The Goddess of the Thames Edit

As a thanks for their previous help, Katrielle, Ernest, and Sherl are all invited on a luxury cruise on the Thametanic. Once aboard, the owner of the ship, Mustafa Fullhold decides to entertain the guests with a treasure hunt around the ship where they have to find little statues of the Goddess of the Thames. But when the main prize, a fully sized golden statue worth millions, goes missing, Katrielle is tasked with finding it back.

Case 9: The Battle of Hastings Edit

On Godwin's day, a local holiday, Katrielle is enjoying a day without work. Suddenly, Inspector Hastings enters the Detective Agency and tells Katrielle that it is his wife's birthday and that he forgot all about it, and begs Kat to help him find a suitable present despite every shop being closed.

Case 10: The Importance of Being Ernest Edit

Sherl is having a talk with Ernest about why the latter is so willing to work for Katrielle despite not being paid. Ernest then tells him the story of when he once was accused of theft, and how Katrielle managed to prove his innocence.

Katrielle is accused of murdering Clover Pryce and it is up to her to clear her name and catch the real killer.

Layton and the Seven Dragons are invited by the mysterious Lord Adamas to the abandoned mansion of Lord Maximilian Richmond, a millionaire who died 10 years before. In the occasion, Adamas forces the Seven Dragons to sign a contract where they relinquish all their fortunes to him should they fail to solve a series of puzzles, or he will reveal a grave secret about them. Attending the event at Layton's stead, Katrielle accepts Adamas' request to oversee the dispute. All of the Dragons fail to solve the puzzles and accept defeat, until Katrielle discovers that Lord Adamas is no other than Ernest, whose true identity is Miles Richmond, Maximilian's grandson, who grew up with the false assumption that the Dragons betrayed and ruined their family, swearing to enact revenge on them. After the misunderstanding is cleared, Ernest reconciles with the Dragons and accepts Katrielle's request to keep working as her assistant.

In the post-credits, Katrielle renews her vow to unlock the mystery of Sherl's true identity and discover the whereabouts of her father. Although she is no closer with the latter, she proclaims that she has solved the puzzle that her father left behind when he disappeared: "If you're not really my child, then who exactly are you?". 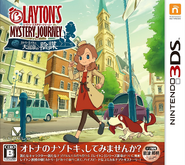 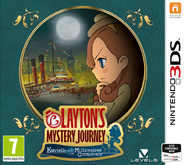 British Boxart (3DS)
Add a photo to this gallery

Retrieved from "https://layton.fandom.com/wiki/Layton%27s_Mystery_Journey:_Katrielle_and_the_Millionaires%27_Conspiracy?oldid=89281"
Community content is available under CC-BY-SA unless otherwise noted.