レイトンセブン
Reiton Sebun
Layton 7 is a mobile game loosely related to the Professor Layton series. The "7" in the title refers to the number of characters, rather than the number of the installment.

Both Professor Layton and Luke Triton will appear in the game.

The game was originally revealed during LEVEL-5 Vision 2013, where it was announced for the Nintendo 3DS as well as Android and iOS. The game was marketed as a "role-playing puzzle game".[1]. The game had no relation to the Professor Layton series other than the name at the time.

No additional information about the game would be shown until LEVEL-5 Vision 2015. The game had received a big makeover, getting a style closer to the Professor Layton series, as well as adding some familiar characters[2].

At the start of the game, people are divided into different roles. Each role has different skills which can be used.[3]

The Vampire and Traitor form the Vampire Team (吸血鬼チーム) while the others form the Villager Team (村人チーム). The goal of the Vampire team is to kill all the villagers by attacking them. In contrast, the Villager team needs to successfully exile the vampire by agreeing on its identity.

The game happens in two alternating phases: the Day phase and the Night phase. During the Day phase, players will communicate with the others in order to identify the vampire. They can do so by using keywords to accuse the other players of being the vampire. Keywords can also be quoted after every player has used them, giving players the opportunity to figure out who is bluffing or telling the truth.[3]. During the Night phase, the special abilities can be used. The vampire gets a chance to attack a villager, and if successful, that villager will no longer be able to participate. 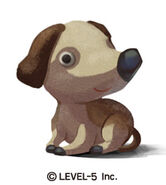