Lettie Mailer is a character appearing in Professor Layton vs. Phoenix Wright: Ace Attorney. She appears as a witness during the second Witch Trial, due to Emeer mentioning making a request to her.

She is very serious about her Clients Confidentiality and will avoid talking about what she reads on people's letters. However, before she became a mailer, she was a thief and loved gossiping. When she met Newton Belduke, he suggested she become a courier since her only skill was being fast on her feet, and taught her the importance of not giving people's private information away.

Lettie is shown to have a crush on Jean Greyerl before she discovers that she's actually a girl. However, in the credits, there is a scene where Lettie is hiding in the bushes, looking at Jean and holding a love letter and flowers, suggesting that Lettie still likes Jean. 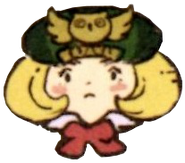 Lettie's trial avatar
Add a photo to this gallery

Retrieved from "https://layton.fandom.com/wiki/Lettie_Mailer?oldid=82974"
Community content is available under CC-BY-SA unless otherwise noted.