"I can't steal another's life so I can live my own!"
— Melina explaining her motives to Layton and co., Professor Layton and the Eternal Diva

Melina Whistler is a character from Professor Layton and the Eternal Diva. She was close friends with Janice Quatlane.

Melina Whistler wore a dark turquoise dress which had various shapes on it. She had her hair tied in two loose ponytails with light pink bands. Underneath her dress she wore a dark purple top and tights of the same color. She wore soft boots on her feet.

Melina is the deceased daughter of Oswald Whistler and the friend of Janice Quatlane. She loved playing the piano. Before the events of Professor Layton and the Eternal Diva, Melina died of an aggravation that appeared while she was fighting a disease at the young age of 22. Both Janice and Oswald were devastated by her death, and Oswald went as far as building the Detragan to store Melina's memories in the hope of resurrecting her.

Janice was one of the first people to have Melina's memories pumped into her brain. Initially, the process failed like it did with everyone else. However, when Oswald turned his back to the machine, Janice buried her personality voluntarily so that Melina could act in her place. It later turns out she was the one that wrote the letter to Professor Layton. Nina was another candidate to house Melina's memories, though she resisted and the process failed.

Eventually, it is revealed that the contest for eternal life was just a scheme to lure more candidates to house Melina's memories (due Oswald not knowing the transfer to Janice succeeded). Amelia Ruth was supposed to be the next "winner", and, in desperation, Luke Triton was going to be next. But Janice stole the key and Melina revealed herself. Jean Descole revealed that Melina is the only one who knows A Song of the Sea, a song, along with A Song of the Stars, that will cause Ambrosia to rise again. This fails twice at first and after a fight, Layton reveals that there is a third song that needs to be played, A Song of the Sun. While Melina, inside Janice, sings, Layton plays the melody in combination with the other two causing the lost city of Ambrosia rises above the water.

In the end, Melina left Janice's body, because she knew it was wrong to use someone else's body so she could live her own life. Even though Janice was reluctant, she let Melina go and the latter left. Layton and Luke wonder if Melina Whistler was a reincarnation of the Queen of Ambrosia, because the legend of Ambrosia stated that the City of Harmony would rise again when its queen returned. 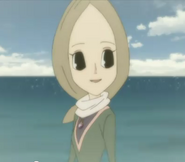 Melina talking to her father along the shoreline

Melina and Janice talking to each other. 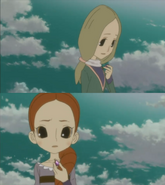 Melina singing while her father plays the piano.

Melina gazing in her room

Melina, Janice and Oswald in the Eternal Kingdom book.

A photo of Melina and Janice in Melina's Bedroom

Melina and her father taking a walk along the beach.

A close up of Melina in the Eternal Kingdom book.

Melina conversing with her father in her bedroom

"Farewell Janice... It is time for you to start living your own life again."
Add a photo to this gallery

The only daughter of a famous composer. A self-sacrificing young woman.

Retrieved from "https://layton.fandom.com/wiki/Melina_Whistler?oldid=91474"
Community content is available under CC-BY-SA unless otherwise noted.