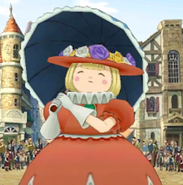 Muffet as she appears during Professor Layton vs. Phoenix Wright: Ace Attorney
Add a photo to this gallery

Muffet does not have a profile.

This character page is a stub. You can help the Professor Layton Wiki by expanding it.

Retrieved from "https://layton.fandom.com/wiki/Muffet?oldid=70164"
Community content is available under CC-BY-SA unless otherwise noted.