Muggs and Robbs attack Espella as she is on her was back to the bakery. Before they are able to rob her however, the magic spell Ignaize is used, setting the two of them on fire. They quickly burn to death, and Espella is accused of being a witch as a result. Later on, it is revealed that Robbs and Muggs became Shades, and Darklaw claimed that they were some of her best.

Muggs and Robbs, as they appear during a cutscene from Professor Layton vs. Phoenix Wright: Ace Attorney 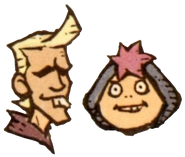 Muggs and Robbs' avatar during trials

Retrieved from "https://layton.fandom.com/wiki/Muggs_and_Robbs?oldid=91396"
Community content is available under CC-BY-SA unless otherwise noted.