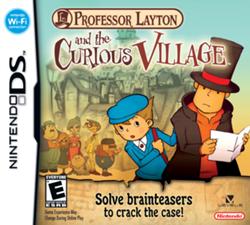 "In the curious village of St. Mystere, puzzles are part of everyday life. So when a wealthy baron's will points to a hidden treasure, it's up to puzzle mastermind Professor Layton to unravel the mystery! Stretch your gray matter to solve brain-teasers and piece together the clues to uncover St Mystere's secret..."

Professor Layton and the Azran Legacy

In May 2018, a HD port of the game was announced called Professor Layton and the Curious Village EXHD for Smartphone[n 1][1] ("HD for mobile" in the west). It was released in September of the same year and features high resolution graphics. The story and puzzles of the game remain the same from the original. The gameplay is also mostly the same, but a few enhancements have been added, such as the ability to use multiple colors in memos, a feature that was originally introduced in later installments of the series. The game also adds a new collectible in the form of Puzzle Charms, which are now needed to unlock bonus content.

The game opens with Professor Layton and Luke driving in the Laytonmobile. Layton hands Luke a letter that explains where they are going, and why: The late Baron Reinhold revealed in his will that there is a Reinhold family treasure called the Golden Apple hidden somewhere in the village they are heading to. Anyone who would successfully locate that treasure will inherit the whole of the Baron's estate. Several people have attempted to find the treasure, but failed.

After helping Franco with the drawbridge, the two enter the town and find that most of the population is fond of puzzles and brain teasers, both which Layton and Luke are adept at solving. They also see a large, haphazard tower that occupies the one side of town that no one can get to, but that people keep hearing strange noises emanating from at night.

Layton and Luke meet Lady Dahlia, other family members of the Baron like Simon and Gordon Reinhold, and the servants. Before they can discuss the matter further, a loud exploding sound is heard and Dahlia's cat, Claudia, flees out of the door. Layton and Luke chase Claudia through town, solving puzzles along the way. Meanwhile, a strange soot covered man arrives in St. Mystere. During their search for Claudia, Layton and Luke learn from Franco that somebody stole the crank while the drawbridge was up leaving the village's only entrance/exit sealed. So they decide to go check into the inn, but the woman in charge Beatrice only offers them the attic as the other rooms are being remodeled. Eventually, they discover the cat's fondness for fish from Agnes and tempt him back with one.

Upon returning to the mansion, Layton and Luke find that Simon has been murdered and the case is already under investigation by Inspector Chelmey. Chelmey initially suspects the two, but as their alibi holds up he lets them go, and tells them to stay of out of the murder investigation. However, Layton finds a small gearwheel near Simon's body. The two also find a picture of the late Baron's now deceased wife, Lady Violet Reinhold, who looks identical to Lady Dahlia. After seeing Claudia with Simon's glasses, Layton and Luke learn that one of Dahlia's servants, Ramon, has gone missing. They go look for him leading them to Lucy, Jarvis, Zappone, Pauly and Crouton and learn that people have been disappearing usually when they get sick.

Night falls while Layton and Luke continue their search for Ramon and the Golden Apple. After returning somebody's watch, they visit a cafe then witness the kidnapping of Ramon when a strange man stuffs him into a bag. They give chase but are unable to catch him, though they do find another gearwheel similar to the one before and have good look at the large tower which appears to be making some rumbling noises. Not long after, at the Reinhold mansion, they are befuddled as Ramon comes back as if nothing has happened; with no recollection of anything alarming happening to him.

The next morning, the two return to the manor via a phone call from Chelmey and find him yelling at Matthew, the Reinhold family butler, for bringing him sweets. They also learn from Beatrice that someone else had checked into the in and left without paying the bill, his room was a mess and his description sounded like Chelmey but his appearance was completely different. With everything going on, Layton and Luke barely have any time to search for the Golden Apple, but remembering that the villagers wouldn't go near the tower, they go there.

They continue to explore the town, eventually led to the town's abandoned amusement park via a ticket left by a young girl met at a dead end while trying to get to the tower. Before going there, Giuseppe gives them a blue vase at the market saying it is Layton's, the professor denies this and gives it back. They also find a newspaper revealing a more good-natured Chelmey that contradicted his earlier claim of hating sweets.

At first, nothing in the park seems to give them any clues. But as they explore, the Ferris Wheel suddenly comes lose. The sinister figure from earlier uses a remote to tear the wheel from its moorings and send it chasing after Layton and Luke, who barely escape as the wheel smashes through a locked building. Exploring the wreckage, they find an entrance to an underground room. Inside, they find a key shaped similar to the tower, and Layton gets an idea of what's going on in the village.

Soon after getting a summon from Ramon at the inn, the two return to face Chelmey, who accuses Layton of murdering Simon with the vase from the market, and Luke of being his accomplice. Layton realizes, through the Inspector's mistakes, that Chelmey is an impostor. The man reveals himself as Layton's self-proclaimed arch-enemy, Don Paolo, who tried to use the Ferris Wheel to knock Layton out of the picture and seeks the Golden Apple for himself. Paolo jumps out a window and escapes before Layton can capture him. It is unknown so far as to why Don Paolo despises Layton.

With Luke in tow, Layton heads for the tower, using the key to unlock a secret wall in the dead end. Inside, they discover the man that previously kidnapped Ramon, Bruno. Layton exposes the truth with Bruno's help: all the residents of St. Mystere are robots, created by the Baron and Bruno to challenge the wits of anyone seeking the Golden Apple, which explains why all the townsfolk were obsessed with puzzles. Simon wasn't murdered, he only malfunctioned and Don Paolo used his death as an excuse; similarly, Bruno "kidnapped" Ramon in order to perform repairs below the tower. Having solved the puzzle of St. Mystere, Layton and Luke climb the tower, solve some more puzzles and meet minor characters along the way. The pair deduce that Bruno stole the drawbridge's crank so they can find the Golden Apple and that Lady Dahlia was originally constructed to resemble and behave like Lady Violet.

Eventually, the pair reaches the top of the tower, and much to their surprise, find a small house there. Inside, the young girl from before awaits. She reveals herself as Flora, the only daughter of the Baron and the Golden Apple that the robots were protecting. However, this realization is short-lived as Don Paolo returns in a flying machine and starts demolishing the tower. Luke escapes down the stairs, but they are destroyed, so Layton is forced to improvise a glider to take Flora and himself to safety as the tower collapses. The villain swears revenge and leaves after his machine was damaged after colliding with Layton's glider. The tower, unable to withstand Don Paolo's attacks, crumbles. The three are safe in town and as Flora laughs in happiness; an apple-like birthmark can be seen on her shoulder. As they regroup at the Reinhold manor, Layton realizes that there's more than just Flora as the treasure, as the birthmark points to the Baron's riches. Luke finds a switch on the portrait of Flora which leads to a secret room filled with gold. An audio recording of the Baron congratulates those that had followed the clues, and tells Flora to take the treasure, warning that if it is taken, all the robots will stop functioning. Flora opts to leave it as a way to repay the robots for their years of service to protect her and as her friends. As the game ends, Layton, Luke and Flora leave St. Mystere, leaving the treasure, and allowing the residents to continue on with their lives. Flora leaves the village with Layton and Luke. The three (and other characters) are shown laughing and living together during the game credits. 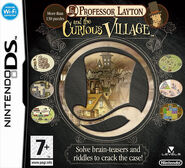 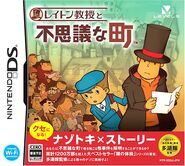 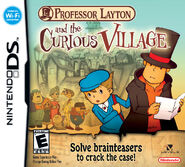 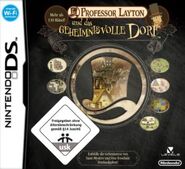 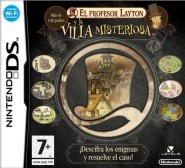 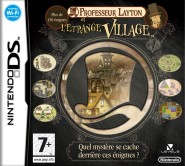 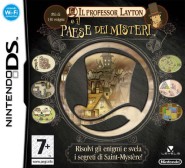 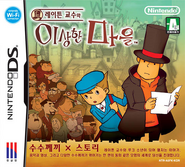 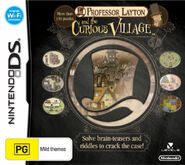 HD for Mobile Logo
Add a photo to this gallery

Retrieved from "https://layton.fandom.com/wiki/Professor_Layton_and_the_Curious_Village?oldid=89273"
Community content is available under CC-BY-SA unless otherwise noted.