Professor Layton and the Mansion of the Deathly Mirror

Professor Layton receives a letter about a mysterious manor that contains a mirror which is said to cause death upon anyone who dares to look into it. The Professor and his apprentice Luke Triton set out to investigate this interesting case.

Gameplay is very similar to the games released for the Nintendo DS: players control Professor Layton and Luke as they investigate the manor that contains the Death Mirror. Characters they meet present them with various puzzles which have to be solved, gaining Picarats as reward. The Hints system is also the same as those games.

On November 1, 2012, the game was re-released through the ROID service under the name Professor Layton and the Mansion of the Deathly Mirror -Remix- (Japanese: レ イ ト ン 教授 と 死 鏡 の 館 -REMIX-). In this version, all puzzles have been replaced with brand new ones. 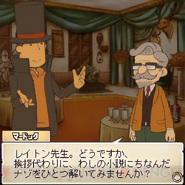 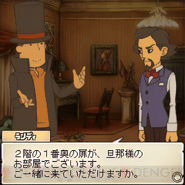 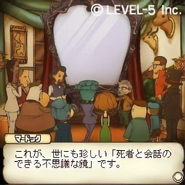 Retrieved from "https://layton.fandom.com/wiki/Professor_Layton_and_the_Mansion_of_the_Deathly_Mirror?oldid=94260"
Community content is available under CC-BY-SA unless otherwise noted.