500의 진주
500 Pearls is a puzzle in Professor Layton and the Diabolical Box.

A magician charges a traveler with a task. "Take a certain number of pearls out of a bag of 500. This number, when divided by any number two through seven, always produces a whole number if you remove one pearl before dividing. Bring me this number, and all the pearls are yours."

The number of pearls the traveler takes from the bag doesn't produce a whole number when one pearl is removed and the remaining pearls are divided by four. But his number meets the other conditions. How many pearls did he take from the bag?

A wizard sets a traveller a strange task.

"There are 500 pearls in that cave. I want you to go and bring a certain number of pearls to me. This number allows you to divide the pearls into groups of 2, 3, 4, 5, 6 or 7 and always have one pearl left over. Bring me this number of pearls and you can keep them all for yourself!"

The traveller tries his best, but the number of pearls he bring back doesn't leave one pearl over when divided into groups of 4. How many pearls did he bring to the wizard?

Let's see if we can't simplify this one. The magician wants a number that can be divided neatly by a whole number when one pearl is taken away from the totals.

To get the number of pearls he's looking for, you need to find a number that can be neatly divided by all numbers two through seven, and then add one to the total.

Let's reduce the wizard's original question a little. If there is always one pearl left over when dividing the total number by the numbers 2 to 7, then the traveller is being asked to find a number that can be neatly divided by those numbers, and then add one to the total.

Don't forget that his answer fails to take into account the number 4.

Now let's think about what the traveler actually brought back. To get his number, you must find a number that can be divided by two, three, five, six, and seven, but not four. Then add a single pearl to that number.

The traveller's number must be one more than a number that can be divided by 2, 3, 5, 6 and 7. This means the number you want to add one to is a multiple of all these numbers. Finding it sounds hard, but there are ways to make it easier. The largest number, 7, will have the fewest multiples in the range 1 to 500, so you should start working out multiples of 7 in that range and then see which of those are divisible by the other numbers.

The number the magician was after is greater than 400, but the number of pearls the adventurer brought back was actually in the range of 200 to 300 pearls.

Remember, you're out to find the number of pearls the adventurer decided to bring back.

If you're still finding it too time-consuming to find common multiples for the numbers on the list, here's a little trick.

This puzzle may seem like a pain to solve, but if you take the time to calculate everything out, there's really nothing difficult about it.

This puzzle may seem like a pain to solve, but if you take the time to calculate everything, there's really nothing difficult about it. There are also ways to reduce the amount of calculation you need to do.

The answer is 211 pearls. The magician essentially asked for the value one more than a value that, when divided by any number two through seven, produces a whole number. Any of these numbers divides neatly into 420, so when one is added to it, you get the magician's number: 421.
The number of pearls the adventurer had is a number that's neatly divided by any number from two through seven, except four. Adding one to that gets you your answer.

The answer is 211 pearls. The traveller's number must be between 1 and 500, and one more than a number that is divisible by 2, 3, 5, 6 and 7. The quickest way to find this number is to make a list of multiples of 7 up to the limit of 500, then see if those numbers are also divisible by the other numbers. This takes quite some time unless you realise that any number divisible by 6 is also divisible by 2 and 3, so you really only have to compare your multiples of 7 against 6 and 5. If only the traveller had brought back 421 pearls... 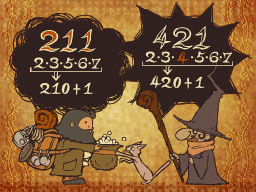 Retrieved from "https://layton.fandom.com/wiki/Puzzle:500_Pearls?oldid=86949"
Community content is available under CC-BY-SA unless otherwise noted.