Scoreverloop
A Difference of 39 is a puzzle in Professor Layton and the Unwound Future.

Touching the squares on the scoreboard below will turn them from white to green.

Both sides currently display 58, but Luke and Professor Layton are planning to each touch one square and create two different numbers.

The difference between the two numbers will be 39. What are those numbers?

Here are two scoreboards, made up of panels. Touching a panel reverses its colour.

Both scoreboards currently display 58, but by touching just one panel each, Layton and Luke can create two new numbers. The difference between these numbers is 39.

Try to work out which panels they touch and which new numbers they make. Enter your answer as two-digit numbers.

What squares can you touch to make a new number out of the old one?

Think about both numbers--the five and the eight.

You can make a six and a nine out of a five by changing one square.

You can make a zero, a six, and a nine out of an eight by changing one square.

Now it's just a matter of finding the difference between the two numbers.

What numbers can you make by touching one white square on each side? 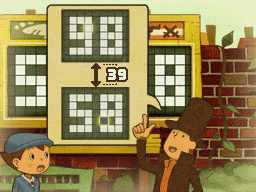 Retrieved from "https://layton.fandom.com/wiki/Puzzle:A_Difference_of_39?oldid=86155"
Community content is available under CC-BY-SA unless otherwise noted.