None
A Fearsome Foe is a puzzle in Professor Layton and the Curious Village.

There was once a knight bold and brave. He felled countless opponents and was said to be fearless on the battlefield.

However, legend has it that there was one foe that set the knight quaking in his armored boots. The knight feared this monster because of the rumor that surrounded it. It was said that anyone who slew the beast was destined to spill his own blood in the process.

Can you guess the identity to this terrifying foe?

You too may have bested this foe in battle.

Your answer should be eight letters long.

This fearsome beast is one you're probably intimately familiar with.

This bloodthirsty beast is none other than the dreaded mosquito.

Squish one of these little guys while it's on your arm, and you'll have your blood all over before you know it. Truly a fearsome, if somewhat annoying, opponent. 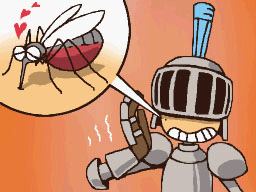 In the Japanese version, this puzzle is listed as Weekly Puzzle 27.

Retrieved from "https://layton.fandom.com/wiki/Puzzle:A_Fearsome_Foe?oldid=85390"
Community content is available under CC-BY-SA unless otherwise noted.