A Puzzle of Fractions

A Puzzle of Fractions is a puzzle of Layton's Mystery Journey: Real World Puzzle Solving. 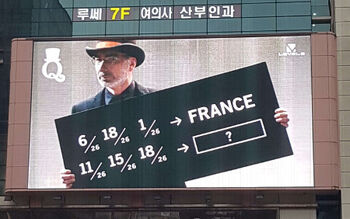 Since "FRA" is equivalent to France, we can deduce "KOR" will stand for Korea.

The answer is KOREA.

Retrieved from "https://layton.fandom.com/wiki/Puzzle:A_Puzzle_of_Fractions?oldid=80331"
Community content is available under CC-BY-SA unless otherwise noted.