Professor Layton Wiki
Register
Don't have an account?
Sign In
Advertisement
in: All Puzzles, 0 Picarats, Tap Answer,
and 3 more
English

Tap Answer
Analog Angles is a weekly puzzle in Professor Layton and the Unwound Future.

Three times of day are listed below. Which one, A, B, or C, forms the largest angle between two hands when displayed on an analog clock?

Keep in mind that each time actually forms two angles between the clock hands--one on the inside and one on the outside.

This is a puzzle, after all, so the answer isn't quite as simple as it might seem at first glance. 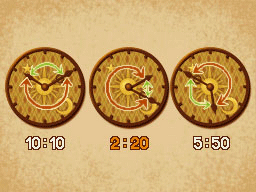