Ritter Ungestüm
Armor Antics (Armour Antics in the UK version) is a puzzle in Professor Layton and the Last Specter.

Somebody threw on this suit of armor in the same exact attire they're wearing now and put a dent in the helmet!

All you need is a close look at the perpetrator to find out who it was.

Which of these four lads was it?

"One time there was this palaver up at the manor. Some hoodlums thought it'd be hilarious to get dressed up in the old suits of armour and have a race. But one of 'em falls over and puts a big dent in one of the helmets. We had 'em all rounded up, but - honour among thieves and all that - not one of 'em will own up. Then the chief, he takes just one look at 'em and picks out the culprit."

Which of these four suspicious lads is the one who dented the armour?

Getting in and out of a suit of armor while wearing a hat would be nearly impossible.

A good sleuth will use the process of elimination to find the culprit.

A good sleuth uses a process of elimination to find the culprit.

You can disregard lad C because he couldn't fit in the armor.

It should be possible to disregard suspect C because it doesn't look like he could even wear the armour.

Whoever was wearing the helmet when he dented it probably hurt himself too.

Who could it be?

Whoever was wearing the helmet when he dented it probably hurt himself too. Who could it be?

The lads are all facing the opposite way of the armor, so don't get the position of the dent confused.

The suspects are all facing the opposite way from the armour, so don't get the position of the dent confused.

Take another look at each of the lads.

Take another look at each of the suspects.

The culprit was D.

There is a bump on his head matching the dent in the helmet, but he was hiding it with his hand!

There's a bump on his head matching the dent in the helmet, but he was using his hand to hide it! 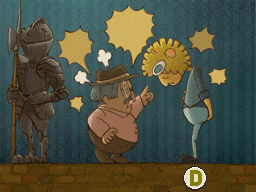 Retrieved from "https://layton.fandom.com/wiki/Puzzle:Armor_Antics?oldid=85086"
Community content is available under CC-BY-SA unless otherwise noted.