Heen en weer
Back and Forth (How Long? in the UK version) is a puzzle in Professor Layton and the Unwound Future.

The travelers shown below are an hour away from their destination. Twelve people are divided into two cars (that each seat six people), but one of the cars just broke down, leaving only one vehicle for the rest of the trip.

Using just the one car to drive back and forth, how many hours will it take to get everyone to the destination?

From here, a one-way trip your destination takes an hour. The plan for the trip was to divide 12 people into two six-seater cars, but one of the cars broke down, so you can only use the other one.

Assuming that the journey back takes the same amount of time as the journey there, how many hours will it take to get all 12 people to your destination using one car?

The car seats six people, so after one hour the first six people arrive at the destination. Once five are dropped off, however, somebody has to drive the car back to pick up everyone else.

You have a six-seater car, so the first step involves six people going to the destination. After dropping people off, it's time to return to the starting point.

It takes two hours to drop off the first five people and drive back to get another load of passengers.

There are six people still waiting, so the driver will load up as many as possible before heading back...

After two hours, the car has returned to the starting point, where there are six people waiting.
Fill the car with as many people as possible and set off again.

When picking up the second round of passengers, can you load up all six people who are waiting?

Don't forget about the driver...

The second time you set off for the destination, did you assume that all six peope remaining at the starting point would be able to make the trip?

Don't forget that a car needs a driver.

After dropping off the second load of five people, it's taken three hours and somebody still needs to drive back and get the last person waiting.

It takes one hour each way, so you should be able to figure out the final answer by now.

After making two round trips with a full car, all you need to do is get the driver and the one person remaining to your destination.

You know that a one-way trip takes one hour, so you should already have your answer.

Are you sure you're not overlooking a crucial point?

It will take five hours.

Even though six people can ride at once, somebody needs to drive the car back to where the others are waiting, so it will require three trips to get all 12 people to the destination.

Five hours.
The car always needs a driver in order to make the trip back. As such, it will take two round trips and one-way trip for all 12 people to reach the destination. 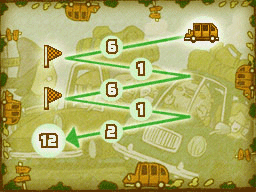 Retrieved from "https://layton.fandom.com/wiki/Puzzle:Back_and_Forth?oldid=87309"
Community content is available under CC-BY-SA unless otherwise noted.