Episode (Ballooning Out of Proportion)

失くしたものは
Backstage Blunder is a puzzle in Professor Layton and the Miracle Mask. The puzzle must be solved in order to progress the story.

Oh no! This clown is supposed to be onstage in a few minutes, but he tripped and dropped his juggling equipment!

Everything he was carrying came in pairs, but an item from one of his pairs has gone missing.

Can you find it?

Oh no! Yukkles is supposed to be on in a few minutes, but he's just tripped and now there's juggling equipment all over the floor!

Everything should be in pairs of two identically shaped and coloured items, but there's one object here whose twin seems to have gone missing.

Which item's twin is missing?

The twins of every object on the floor are present. Great!

Wait... Is there something you've missed?

All this equipment is used in the clown's juggling act. You know what juggling is-- it's when you throw and catch balls without ever letting them fall to the ground.

Skilled practitioners often use objects other than balls, though.

Are you sure you aren't making any incorrect assumptions?

An object you use to keep your equipment in can also be considered a piece of equipment.

You can juggle anything, even boxes that you keep other things in.

That's right. The clown "tripped and dropped" his equipment, but that doesn't mean he isn't holding one piece of that equipment.

What is he holding?

That piece of equipment must have a twin after all.

The clown is only holding one box, which is part of his juggling act too. Where could the other box be...?

The box Yukkles is holding is part of his juggling act too. Where could its twin have got to? 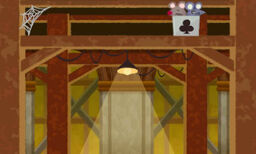 Retrieved from "https://layton.fandom.com/wiki/Puzzle:Backstage_Blunder?oldid=87524"
Community content is available under CC-BY-SA unless otherwise noted.