Professor Layton Wiki
Register
Don't have an account?
Sign In
Advertisement
in: All Puzzles, 0 Picarats, Select and Submit,
and 3 more
English

Select and Submit
Bandage Bonanza is a weekly puzzle in Professor Layton and the Unwound Future.

A friend of yours just loves adhesive bandages. He LOVES them. Like, he would marry them if he could. He wears them all the time, whether he's injured or not. He says they're the new paisley...seriously.

As usual, he's got a bunch stuck all over his face. But today, he's made a puzzle out of them just for you!

"Which one did I stick on first?"

Touch the correct bandage to mark it with an X, and then tap Submit.

The first bandage he stuck on should be underneath all of the others.

Look closely at all of the bandages before submitting your answer.

The bandages he stuck on first should be beneath all the rest. If you look closely, you'll see that there's only one bandage that doesn't overlap any of the others. 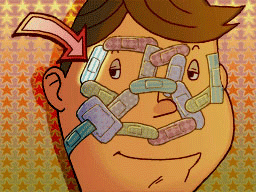