Input
Bat Attraction is a weekly puzzle in Professor Layton and the Last Specter.

The bats in this cave roost in a grid of four rows and five columns. These bats are unique in that any bat that flies from the roost will be joined by the bats vertically and horizontally next to it.

If two bats fly from the roost, what is the maximum number of bats that will fly away at the same time?

Imagine what happens when a bat flies from the roost. The bat above, below, to the left, and to the right will fly away with it. What do you think will happen next? And then what will happen?

More bats will fly away than you may have expected.

Try to think it over again. 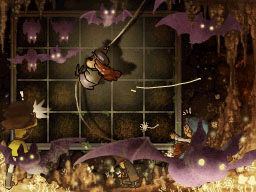 Retrieved from "https://layton.fandom.com/wiki/Puzzle:Bat_Attraction?oldid=85829"
Community content is available under CC-BY-SA unless otherwise noted.