De bouwinspecteur
Beams and Ladders (Ladder Puzzle in the UK version) is a puzzle in Professor Layton and the Unwound Future. The puzzle must be solved in order to progress the story.

To inspect this odd construction site, start at the orange arrow and pass through points A, B, C, and D in order.

Be sure to cross every beam and use every ladder, but your path can't cross except to pass over or under a ladder.

In what order will you use the white ladders? Place the ladders numbered 1, 2, and 3 in the correct locations to solve this puzzle.

Here's a strange construction site. You have to inspect every ladder and girder, starting from the arrow and passing through points A, B, C and D in order.

You never take the same route twice, except to pass over or under a ladder. In what order do you use the white ladders?

Drag the numbered ladders over the white ladders to indicate their order.

This construction site certainly looks complicated to traverse, but it can be done. Don't overthink it.

It looks complicated, but it's just one unbroken line.

There are several routes you can take, but the order in which you'll end up using the three ladders is always the same.

There is more than one route you can take, but the order in which you use the white ladders is always the same.

From the start, head straight down the white ladder to reach point A.

Head straight down the white ladder under the starting point to get to A. There's your first ladder.

Once again, to get from the start to point A, use the white ladder directly below the orange arrow. That's ladder number one.

To get from point A to point B, don't use any of the white ladders.

You should be able to figure out where to place the second and third ladders from here.

As mentioned in Hint 3, use the ladder under the starting point to get to A. That's the first ladder. Don't use a white ladder to get from A to B. This should be all the information you need.

All you have to do now is decide on the order of the other two ladders.

If you stay calm, the answer will come.

Take your time and give it some thought.

Whichever route you decide to take, the ladders will be used in the same order.

The routes may all seem inefficient, but no matter which way you go, since you path can't cross, the distance traveled is exactly the same.

No matter which route you take, the three ladders get used in the same order.

These routes may seem inefficient, but no matter which one you take, since you can't go the same way twice, the distance travelled is the same. 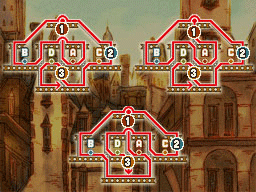 Retrieved from "https://layton.fandom.com/wiki/Puzzle:Beams_and_Ladders?oldid=88499"
Community content is available under CC-BY-SA unless otherwise noted.