Blokkenblokkade
Block Blockade is a puzzle in Professor Layton and the Unwound Future. The puzzle must be solved in order to progress the story.

Your escape route is blocked... by blocks!

Luckily, you have five bombs at your disposal. Each bomb will completely destroy the block it's placed on. Remaining blocks will fall into empty spaces created below them by destroyed blocks, but they won't change shape.

Place your five bombs on the five blocks that, when destroyed, will leave behind a flat surface you can drive across. Then push that button!

There are five specific blocks you need to destroy. Don't worry about making a mistake, though. You can try again as many times as you want, so just have fun blowing stuff up! You're bound to figure it out eventually.

If you look closely, you'll notice that the blocks are made up of evenly sized squares. Also, the pit is five squares deep. Start your thinking from here.

Do not destroy the square block in the upper right of the stack.

Great job. Now, get out of here! 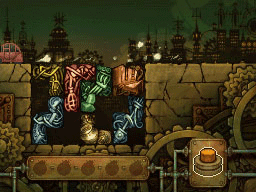 Retrieved from "https://layton.fandom.com/wiki/Puzzle:Block_Blockade?oldid=82326"
Community content is available under CC-BY-SA unless otherwise noted.