Kurioses Konfekt
Candy Counter (Sweetie Shapes in the UK version) is a puzzle in Professor Layton and the Last Specter. The puzzle must be solved in order to progress the story.

You ordered candies in the shape of hearts, clubs, diamond, and spades. But when the candies arrived, you noticed you received the wrong amounts.

The seller claims she sent the correct number of each type, and looking again, you realize she's actually right.

How many of each candy did you originally order?

You ordered sweets shaped like hearts, clubs, diamonds and spades, but when the sweets arrived, you noticed that the quantities were incorrect.

The seller claimed she sent the correct amount of each type. After checking, you realised she was actually right.

How many of each sweet did you originally order?

Take a closer look at the shape of each heart, spade, club, and diamond.

Have a close look at the shape of each heart, spade, club and diamond.

Have you notice the top parts of the spades looks similar to the hearts?

The spades have parts that look very similar to the hearts.

It looks like something broke during shipping and then got stuck to some of the other candy.

Something seems to have broken during shipment.

And then those broken parts got stuck to other sweets.

The candy that broke was a diamond.

The broken pieces of the diamond then got attached to the heart candies, which, in turn, made them look like spades.

The sweet that broke was a diamond.

The broken pieces of the diamond then got attached to heart sweets, making them look a bit like spades.

The candies were arranged neatly in the box, but it seems like they were jostled around during shipping.

Maybe this caused something to break?

The sweets were arranged neatly in the box, but it seems they were jostled around during shipping.

One diamond broke in half and stuck to two hearts, forming what looked like two extra spades.

One of the diamonds broke in half and stuck to two of the hearts, forming what looked like new spades. 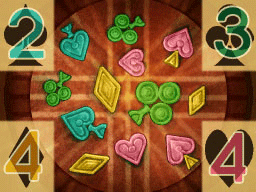 Retrieved from "https://layton.fandom.com/wiki/Puzzle:Candy_Counter?oldid=87017"
Community content is available under CC-BY-SA unless otherwise noted.