Professor Layton Wiki
Register
Don't have an account?
Sign In
Advertisement
in: All Puzzles, 20 Picarats, Write Answer,
and 3 more
English

Drapeaux en fête
Carnival Colors (Carnival Colours in the UK version) is a puzzle in Professor Layton and the Miracle Mask.

Colorful flags have been strung up all over town for the carnival.

There are seven different flags arranged in several different sequences.

One such three-flag sequence is shown in the top-right corner. How many times does this sequence of flags appear in the strings of flags shown above? Write out the answer!

Colourful flags have been strung up all over town for the carnival.

There are only seven different designs of flag, but they're displayed in a variety of combinations.

One such combination is the pattern shown in the top-right corner. How many times does this pattern feature in the strings of flags shown above? Look carefully and write down the number.

Look very carefully at the flags decorating the town.

The easiest way to start is by first locating any of the three flags.

For example, you could look for the white-and-purple flag. Then you could check the flags to the left and right of it to see whether they match the sequence.

Did you spot the sequence near the top-left corner? It won't be as easy to find other instances. There are a lot of flags that look similar at first glance, but are actually quite different.

Speaking of which, did you notice that the flags are double sided? The flags you see with their designs reversed are hanging the other way around. Does that help?

Since the flags are double sided, you'll need to consider what this scene looks like from the other side. In other words, you should look for places where these same three flags appear but with the order reversed.

All three of these flags are symmetrical, so you don't have to worry about the sequence changing when you look from the other side. That's a relief!

How many times does the sequence appear if you include the times it can be seen when looking at the scene from the other side?

It appears once on the string of flags at the back. Did you spot it?

Now add this to the one mentioned in Hint 2, and you should have your answer.

Maybe you're looking at this from the wrong perspective? 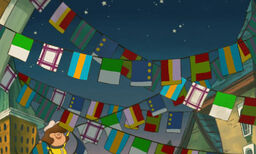