Welcher Vorhang?
Certain Curtains (Curtain Call in the UK version) is a puzzle in Professor Layton and the Last Specter.

The butler left a note with instructions, but it's hard to read because he seems to have written it in a hurry.

Yet there are only four curtains labeled: A, B, C, and D.

Which of these was he referring to?

The butler left a note with instructions, but he scribbled it out in a hurry, making it a little hard to understand.

Which set of curtains could he be referring to here, the ones labelled A, B, C or D?

Perhaps he was in such a hurry, his handwriting obscured the true meaning of his message.

Rushing can lead one to make mistakes, you know.

Do you really think the butler meant to write "13"?

If he was truly in a hurry, he may have written it so sloppily that he could make out the true meaning.

There are no hints to be found in the window or curtains themselves. The note says--or is supposed to say--everything you need to know.

There are no hints to be found in the window or curtains themselves. The contents of the note say it all.

If you push the "1" and "3" in "13" together, they turn into something entirely different.

Something that looks more like a letter than a number.

If you write the "1" and "3" of "13" very close together, then you'll end up with something that looks very much like one of these letters.

The handwriting on this note is atrocious. Maybe the sloppiness is covering the note's meaning.

The note looks as if it was scrawled out in a hurry, so it's pretty hard to read.

The butler meant the B curtains.

A gentleman always has good penmanship!

B is the right answer. 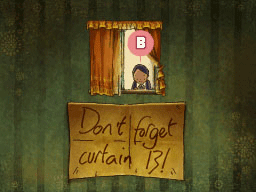 Retrieved from "https://layton.fandom.com/wiki/Puzzle:Certain_Curtains?oldid=84819"
Community content is available under CC-BY-SA unless otherwise noted.