Mark Answer
Crazy Bird is a weekly puzzle in Professor Layton and the Unwound Future.

This crazy bird has brought one pebble per day back to its nest for 10 days in a row.

How many of each color pebble are there?

The fact that there are 10 pebbles in total doesn't change.

You know there's at least one of each color, so there are six pebbles left to figure out.

You also know that the quantities of red > black > white pebbles.

Line up the facts and think about them carefully and the answer will come.

Where did that bird find those pebbles?

What's the bird planning to do with all of those pebbles, anyway? 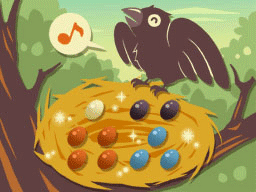 Retrieved from "https://layton.fandom.com/wiki/Puzzle:Crazy_Bird?oldid=75336"
Community content is available under CC-BY-SA unless otherwise noted.