Politie te water
Crossing the River (Four Cross the River in the UK version) is a puzzle in Professor Layton and the Unwound Future.

Four police officers are attempting to chase a criminal across a river. However, their boat can hold only two people at a time.

The first trip across takes one minute, but since the rower gets tired, the second crossing takes two minutes if the same person rows, the third takes three, and so on, getting slower and slower each time the same person rows. In minutes, what's the shortest amount of time if will take the four police officers to get across the river?

Four police officers, A, B, C and D, are chasing a criminal across a river. However, their boat only holds two people, so they can't all cross at once.

What is the minimum number of minutes it would take for all four officers to cross the river?

Think of the first two as A and B. One of them rows the other to the opposite shore. Whoever does the rowing gets tired, so make a not of that.

Let's have A and B cross over to the other side first. One of them has to row the boat. It doesn't matter which one, but be sure to make a note of who did the rowing.

After the first trip across, have the officer who didn't do the work row back. Using this method, the first two who came across will each have rowed only once. When the one who rows back picks up the third officer, have the new person do the rowing.

The officer who didn't row the boat on the way across should row the boat back. This will mean that both the officers who crossed originally have rowed the boat once.
Back at the starting point, put another officer on the boat and have him row across.

After the action in Hint Two is complete, there will be three officers across the river who have each rowed once. One of them needs to go back and get the last person, but it doesn't matter who. They will each take two minutes because it will be their second time rowing.

All three officers on the far side should have rowed the boat once each. Whichever one of them rows back, it's going to take two minutes, so it doesn't matter which one you choose. Have one of them row back to the near shore to pick up D.

So it takes five minutes for the fourth officer to be picked up. There's just one trip across left. If you have the right person row, you should be able to figure out the answer, no problem.

If you've followed the first three hints, your crossings should be as follows:
1 min (out), 1 min (back),
1 min (out), 2 min (back).
Five minutes should therefore have passed by the time D gets in the boat.

If you've worked things out this far, it's obvious who needs to row the boat in order to make the trip as fast as possible.

Try drawing a chart to help you figure it out.

It will take six minutes.

A rows A and B across. B rows back, picks up C, and C rows across. Now that A, B, and C are across one of them has to row back and get D, who then takes over and rows across.

Six minutes. A and B go over on the first crossing, with A rowing. B rows the boat back. C then joins B in the boat and C rows across. A, B and C are now on the opposite side.
One of them needs to row back, but they have all rowed across the river once, so it doesn't make any difference who goes. Once one of them has rowed back, D gets in and rows to the other side.
It therefore takes six minutes to get everyone across. 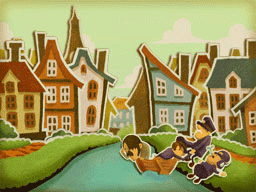 Retrieved from "https://layton.fandom.com/wiki/Puzzle:Crossing_the_River?oldid=88170"
Community content is available under CC-BY-SA unless otherwise noted.