Bestemming bekend
Destination Station is a puzzle in Professor Layton and the Unwound Future.

"See the line of trains heading down? I bet I can guess exactly which station that complete stranger is going to get off the train at."

Which train is this stranger riding?

"Prepare to be amazed! Once while travellin' on a train, I came to the realisation that I knew exactly which station this complete stranger was goin' to get off at. Further evidence of my psychic gift!"

This man doesn't really have any psychic powers. In fact, anybody could have made the same correct prediction. Which train was he travelling on?

Circle your answer, A, B, C or D, and then touch Submit.

You're not overthinking it, are you? If you were riding the same train as the young lad. You would know the answer.

You're not overthinking it, are you? If you were on the same train as this chap, you would know which station the stranger would get off at as well.

If there's only one possible station for everybody left on a certain train to get off at, well, it would be pretty easy to guess somebody's stop, right?

Imagine the train only stopped at one station. Anybody could predict where the stranger would get off then!

Out of the four trains, which one might stop at only one station?

If a train is coming up to the last station on the line, you know for sure that all the passengers will get off at the next stop.

Yes, it's that simple!

The young lad doesn't have any magical powers. In fact, anybody on his train could make the same correct prediction.

Remember, the man doesn't really have any psychic powers, and anybody could make the same correct prediction.

It's heading toward the final station, so you know that all the passengers have to get off at the next stop.

Train D is the right answer.

It is the only train that can reach one end of the line without passing another station, so you know that all the passengers have to get off at the next stop. 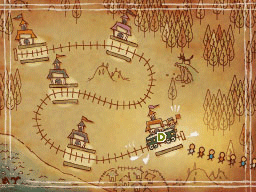 Retrieved from "https://layton.fandom.com/wiki/Puzzle:Destination_Station?oldid=88723"
Community content is available under CC-BY-SA unless otherwise noted.