Professor Layton Wiki
Register
Don't have an account?
Sign In
Advertisement
in: All Puzzles, 0 Picarats, Input,
and 3 more
English

Input
Double Brothers is a weekly puzzle in Professor Layton and the Last Specter.

The four boys below, A to D, are actually two sets of brothers.

If D's father is A's father's sister's husband, then which of the boys is A's brother?

Try using the Memo function to draw the family tree. 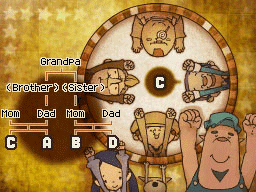