Mark Answer
Double Vision is a weekly puzzle in Professor Layton and the Unwound Future.

Two of the five paper letters below have the exact same surface area as each other. This can be confirmed without performing any complicated calculations or using a ruler. All you need is two of each letter to figure it out.

This being the case, which two of the letters have identical surface areas?

Check the box to the bottom right of both letters, and then tap Submit.

Two of each letter...

Think about how you could arrange two of each letter to create a larger shape. Then try and find the two letters whose combined shapes end up looking exactly the same!

Having two of each letter is the key, so there must be a trick to arranging them.

The letters C and E are correct.

As shown above, putting two Cs and two Es together face-to-face froms the same shape! Since these two shapes can be perfectly stacked, you know for sure that the letters C and E must have the same surface areas. This can't be done with any of the other letters. 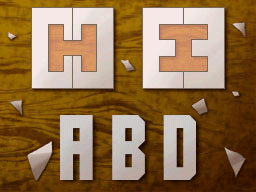 Retrieved from "https://layton.fandom.com/wiki/Puzzle:Double_Vision?oldid=86179"
Community content is available under CC-BY-SA unless otherwise noted.