Wo geht’s bergauf?
Downhill from Here (Assign the Incline in the UK version) is a puzzle in Professor Layton and the Last Specter. The puzzle must be solved in order to progress the story.

While this photograph shows two cyclist passing each other on a hill, the camera was tilted when it was taken, making the incline look completely flat.

Can you tell which side of the photo is actually uphill?

Please tap either A or B to enter your answer.

This photograph shows two cyclists passing each other on a hill, but the camera was tilted so that the incline of the hill would look flat.

Can you work out which way is uphill? Touch either A or B to enter your answer.

If you're having trouble, imagine yourself riding a bike on a steep hill. Which direction would be easier?

Think of yourself as actually being on the hill when you try to solve this one.

If you set a ball on an incline, it would just roll downhill, right?

A bicycle would do the same thing.

If you set a ball on an incline, it would just roll downhill.

Wouldn't a bike do something very similar?

What would the person on the bike going downhill have to do to keep moving?

It's probably the opposite of what the cyclist going uphill has to do.

What would the person on the bike going downhill be doing?

It's likely to look very different from what the cyclist going uphill was doing.

Take a close look at the pedals on each bike. The person going downhill shouldn't need to pedal.

If the person who isn't pedaling is going downhill, then the opposite of the direction they are heading is uphill.

Look again at the photo. Are there any signs that one cyclist is going uphill and another downhill?

You should be able to tell which way is uphill just by looking at the photo.

See if you can spot why the other answer is the correct one.

The side marked A is uphill.

The cyclist on the right doesn't have his feet on the pedals. That must mean he's letting gravity do all the work as he coasts downhill.

The direction marked A is uphill. You can see that the cyclist on the right does not have his feet touching the pedals. That means he's letting gravity do all the work as he coasts downhill. 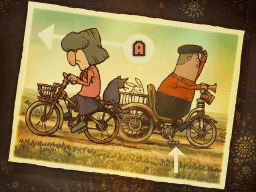 Retrieved from "https://layton.fandom.com/wiki/Puzzle:Downhill_from_Here?oldid=86872"
Community content is available under CC-BY-SA unless otherwise noted.