Vind de klokkentoren
Find the Clock Tower (Clock the Tower in the UK version) is a puzzle in Professor Layton and the Unwound Future.

To find the clock tower in the village below, just follow these directions:

Go straight and take the first left. Take the next right and then the next left, and it will be right in front of you.

At which spot, A through H, is the clock tower located?

Lost in an unfamiliar town, you ask a passer-by for directions to the clock tower. He helpfully tells you:

Assuming that you start from somewhere on the map below, where is the clock tower? Circle a letter, A-H.

You can start from several of the spots and follow this direction. The key is the next part, "Take the next right."

Which starting point will allow you to take a left and then a right?

"Turn left at the first corner..."
This first condition can be fulfilled if you start from any of the locations.

From which starting locations can this condition be fulfilled?

The starting point for the directions provided is spot A, C, D, or G.

Following the directions mentioned in Hint One gives you the following routes starting from spots A and C:

What are the routes if you start from spots D or G?

What happens when you start from D and G?

If you start from spots D or G and follow the directions mentioned in Hint One, you get these routes:

So, what happens if you start from D or G?

The final direction: take "the next left and it will be right in from of you."

Try taking a left from each of the final spots listed in Hints Two and Three.

As long as you remember which way you were facing, you'll figure out the clock tower's location in no time.

Of the ending locations given in Hints 2 and 3, from which one can you "turn left at the next corner"?

Bear in mind the direction you're facing, and try each one out.

The directions are correct, if you start from the right spot, of course.

Hurry up, time waits for no man!

The clock tower is located at spot H.

The directions are from spot A if you're facing spot D.

H marks the location of the clock tower.

You were standing at A and facing D when the passer-by gave you the directions. 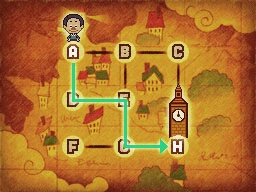 Retrieved from "https://layton.fandom.com/wiki/Puzzle:Find_the_Clock_Tower?oldid=87449"
Community content is available under CC-BY-SA unless otherwise noted.